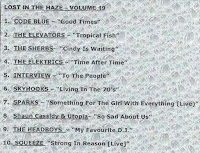 My share this spring of a previous installment in the Lost in the Haze comp series was met with no small amount of enthusiasm, so I couldn't resist sharing another one (and perhaps more in the offing).  For the unacquainted, Not Lame Records was a venerable power pop label and distro, circa the 1990s-'00s.  The CEO would frequently incentivize purchases by tossing in a handmade and self-curated cd-r compilation of impossibly rare songs that never made their way into the digital era proper.  God knows how many volumes existed in the Lost in the Haze series alone (at least 19, obviously).  Accompanied only by a tray card track list with no other pertinent details about the music presented, these compilations were stuffed into paper cd envelopes, and would tend to accumulate in various piles in my house.  With a veritable absence of artwork they went out of sight and out of mind for years until I was able to wrastle 'em all together in a tidying up effort a few months ago.

The cool thing about these custom curios was the exposure it gave me to artists I had heard of, just not actually heard.  The emphasis of Lost in the Haze was centered on overlooked and arcane also-rans (with the occasional rarity from a superstar) from the '70s to the early '80s.  Vol 19 was where I got my first taste of The Elevators, Sherbs, and Elektrics.  This playlist was also a handy reminder of how terrific two major label casualties, Interview and The Headboys were, both of whom should have been reissued and anthologized a long time ago.  And there's a strikingly curious anomaly for a compilation of this ilk, a collaboration between Shaun Cassidy and Todd Rundgren's Utopia.  It was apparently a hit.  As for Sparks, they were never really my bag.  You can check out the tracklist to your above right.

Thanks for this, I have a couple of other volumes.

Interview - To The People is amazing! Just got the whole album it's on.

Very cool- thanks for this and for lots of other cool records over the years! I did a tribute to Not Lame on my Power Pop radio show earlier this year with an accompanying blog post you might be interested in.

Man, I have NO idea how many of these I ended up doing in the 00s but I found a bunch of them earlier in this year and the highest one was in the 20s with the "Lost" series. I'm so glad you dug this one out! The confusing thing for completists(if they care) would be that Not Lame did a lot of themed comps like this, all of which had 2-5+ volumes themselves. "How Swede It Is", "Boston Baked Beans"(for Boston bands), "Obscuros", "Living in the Past", "Those Were Good Times", "Power Pop Hell" 'n such. I was and still a major geek who was obsessed like most here with finding the lost, forgotten and totally great releases of the past. I don't even have them all as they were long ago lost in a computer crash 8/9 years ago. Keep keeping this lost 'n cool music alive folks so it's not lost in the proverbial sands of time...

Is this you, or are you being given the sincerest form of flattery?
https://musicnukeblog.wordpress.com/2016/10/23/va-lost-in-the-haze-vol-19-a-not-lame-records-joint/