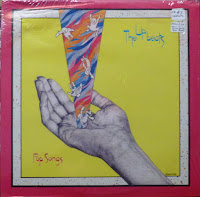 Yet another thoroughly blind purchase, although seeing Peter Buck's name in the credits didn't hurt.  The eclectic Upbeats were from Athens, GA (or thereabouts) with the band's approximate focal point amounting to one Bill Holmes.  Despite being all over the map, Pop Songs has at least two fairly stunning songs going for it, kicking off with "Just Another Pop Song" bearing some Plimsouls-cum-dB's moxie.  Peter and brother Ken Buck have cameos on this one  "The Laser Beam Boys" manages to best the aforementioned by a whisker, sounding like something Matthew Sweet could have conjured in his Buzz of Delight days.  Otherwise, the remainder of Pop Songs traverses a very crooked road, with The Upbeats shuffling lineups from song to song.  We get a faithful run through of the Beatles/Stones chestnut "I Wanna Be Your Man."  "Mary Jane" could pass for a lukewarm Neil Young outtake, "Jello Party Mania" reeks of utterly goofy shtick, and "Roadrunner" isn't the Bo Diddley or Modern Lovers tune, rather a swank, jazzy instrumental that I do believe some folks would term "yacht rock."  Frankly, this unfocused disk reveals itself almost as if were some lost, various artists compilation.  I'm not sure if The Upbeats followed this up with anything.  Pardon the crumpled, water damaged album jacket (not my doing, I swear).