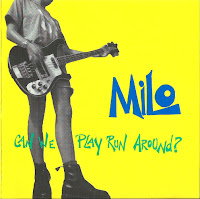 About four years ago I shared what I assumed to be a demo tape by a Champaign, IL power trio, Milo.  I mentioned I had encountered an ep of theirs in the '90s but didn't actually own the thing.  As it's come about, I recently acquired said ep, Can We Play Run Around?  Turns out what I initially thought was a "demo" was an advance cassette of Can We Play...  At any rate, I'm presenting it again from, this time CD sourced and with actual artwork.  I stand by my 2012 critique:

Milo subscribed to a scraggly, indie guitar-punk ethos, recalling at times Titanic Love Affair, the Magnolias, Finger, Liquor Giants, and by virtue indirectly, the Replacements.  Nothing fancy, but effective, and judging how they poised themselves among this nascent batch of rollicking tunes they deserved way more attention than they were likely to have ever received.

A three song 7" followed this ep a few years later.  Not that I actually have it of course.  Enjoy this upgrade.