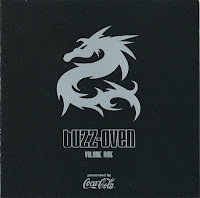 Yep, that's the Coca-Cola logo you see at the foot of the sleeve art to your right.  Wilfully Obscure has indeed sold out, and in the process has forfeited lock, stock and barrel any remaining shred of credibility to a nebulous, corporate monolith that worships at the alter of the almighty dollar.  Ok, so I'm laying it on a tad thick here.
I'm presenting the ninth volume in an ongoing series of fun-sized compilations courtesy of a Dallas, TX record labeled who sought to expose new and emerging musical talent.  Thing is, this disk's main draw, Hagfish, were quite established in their north Texas environs, and arguably nationally via a 1995 PolyGram album, ...Rocks Your Lame Ass.  Despite having kicked around for a good ten years prior to this compilation, Hagfish were ostensibly still "emerging," but in fairness, they were relegated back to the indie circuit, so maybe it all kinda makes sense.  I dunno.  Quite frankly this Descendents-y quartet could not merely rock your ass off, but the remainder of your nether regions as well, with a barreling crush of guitars and a swift but smooth delivery system akin to a 200 mph steamroller.  Hagfish are represented here with two new songs, ('Wrong" & "Yeung Chen") that were to potentially appear on a 2004 album that ultimately never was, due to the splintering of the band.  A crying shame if you ask me.  Guitarist Zach Blair would go onto greener pastures in Rise Against later in the decade.  You can check out the Hag's pedal-to-the-metal 1994 debut, Buick Men, here.

Rounding things out are two veritable unknowns, The Feds and Sally Majestic, both tailored to the more vigorous end of the rawk radio spectrum, who manage to keep things at a rousing boil without embarrassing themselves.

Great post. Love Hagfish. They were a great f**king band. One of those bands that are just too good to great traction in a nation that craves mediocrity.

Buzz-oven wasn't a label. It was a promotional company that was a collaboration between numerous Dallas publications, radio stations, record labels, and booking agencies. (My website, Mundane Sounds, was approached to participate, but I couldn't afford the participation fees). They aimed their focus exclusively at high school kids, with extensive promotional activities aimed at street teams and after-school events.

The people behind Buzz-oven were the same ones behind Last Beat and Dragon Street Records, who released the first Hagfish records, so it kinda makes sense. They also debuted the first material of The Burden Brothers--the Vaden Todd Lewis post-Toadies project, who were also connected to the two labels.

There were about twenty volumes of the series, and reportedly produced a quarter of a million CDs all told.

Thanks Joseph. I remember Last Beat and Dragon Street. Just curious, how many of the twenty volumes do you have? This one in particular became kind of collectible from what i understand. Not sure where I obtained mine.

I have approximately one. I think I should clarify something, there were nearly twenty volumes, but i think they stopped producing CDs around volume ten or so, opting for the wider reach of the Internet and offering them as free downloads. I was never really big into the Buzz*oven thing, though some big names did come from out of that (Bowling For Soup, Eisley, The Rocket Summer, Drowning Pool being the ones I can think of offhand). I think the one you got is the most collectable of the lot, in that it features tracks from an unreleased album.