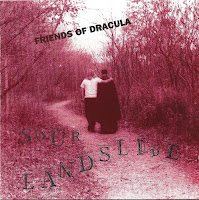 I recently had a request for this one.  I was damn near over the moon about Sour Landslide's second and regrettably final album, They Promised Us Jobs, circa 1997, which found the Toronto based co-ed trio catapulting into their prime with fourteen slices of buzzsaw power pop, akin to a merger of Shoes and Nirvana.  For whatever the reason I gave their first at-bat, Friends of Dracula comparatively short shrift.  Lacking the crunch and immediacy of ...Jobs, Friends bore a more subtle modus operandi that proved to be something of a grower for these ears.  Maybe that's because Sour Landslide were growing and developing themselves.  Unlike that aforementioned swan song, Friends of Dracula conceded more to back-to-basics pop/rock with occasional folky inclinations, putting them more in league with the likes of burgeoning local legends Lowest of the Low.  The long and short of it all is that ...Dracula took a significant amount time to sink in with me.  Hopefully you'll make Friends faster.  By the way "On the Bus isn't the Replacements tune, nor is "William Shatner" a Wedding President cover.

My old band did one tour with the Sours in the late 90s, and getting to see them play every night was unbelievably wonderful. Such a good band! And lovely people.

Wow... I came here months ago to find this album - no luck. Just did a google search to try find it again, and you've only gone and uploaded it a few weeks ago. AWESOME! Thanks for this. :-)

Thank you so much for uploading! So many memories flooding back as I haven't heard this record 20 years and have been literally trying to get my hands on it again for the past several years! I really appreciate it along with the write up and hearing others' memories/stories about Sour Landslide!

Thanks for the kind words, Blitz (and everybody)! Man, is 1994 really 25 years ago? Ouch! My fondest memory of the Friends sessions has to be the two-man guitar on The Cup's Yours. Yes, it took two of us to play one note! I plucked the string and twiddled the volume knob, while our producer Mark jiggled the whammy bar on Vince's Stratocaster. Listen for it in the chorus. It's subtle, as befits a two-man guitar...

Vince is currently writing and demoing new material. I've heard some of it and as you might expect, it's fabulous. Dee is still drumming now and then and I believe she's taken up the bodhran as well. As for me, I released a singer/songwriter album in 2017 and am gigging in and around Toronto. I recently did an acoustic version of "On the Bus" that you can listen to and download here: https://vernnicholson.com/music. Scroll down to "Micro-Tour Highlights" and you'll find it there.

Best wishes from Sour Landslide, and thanks for keeping the flame. ~ Vern