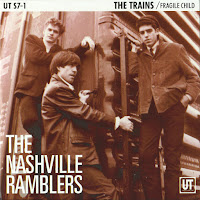 Ladies and germs what I'm presenting you with this evening is an unheralded classic.  A gem.  A pearl.  A Nugget of pure gold.  A record so intrinsically dazzling and utterly persuading that it renders the vast majority of singles that came before or after as sub par at best.  If you're familiar with "The Trains" by The Nashville Ramblers you certainly don't need to hear any more of my platitudes or superlatives, as you've no doubt ascertained the quality and gratification of the 180 seconds or so it encompasses.  For the uninitiated, the Carl Rusk-helmed Ramblers rolled out of San Diego in the mid '80s, with one of their only recorded works, "Trains," winding up on an  unnoticed European compilation album in 1986.  The songs resurfaced briefly on Bomp Records' thoroughly recommended Roots of Powerpop collection in 1996, and was made even more widely accessible on the Rhino Records Children of Nuggets box set about nine years later.

In a matter of speaking, "Trains" is a wonderfully retro-fitted throwback to Brit Invasion pop, with more than a wink and a nod to contemporary Stateside purveyors like the Remains. The Ramblers spin on things was so fine-tuned to this coveted epoch that it sounds more convincingly like a product of 1966 than it's actual recording date of two decades thereafter.  Music scribe Mike Stazx summarizes the songs far more accurately and acutely than I ever could:

Aided and abetted by ace producer MARK NEILL (Black Keys), the band expertly channeled their key influences—Beatles, Remains, Hollies, Everly Brothers, and others—and shaped them into something fresh, urgent and breathtakingly original. A heart-stopping melody, evocative lyrics, a driving beat, soaring harmonies, a dynamic, reverb-soaked production—to hear “The Trains” was to fall in love with it.

"Trains" was officially released as a single in 2011, the Nashville Ramblers lone record they could truly call their own.  It was limited to 1k copies and quite possibly sold out as of this writing.  It's backed with the almost equally melodious "Fragile Child," a sterling jewel in it's own right, originally penned and recorded by the Golliwogs, who were the precursor to Creedence Clearwater Revival (ever hear of 'em)?   BTW, Carl Rusk recorded a solo record, Blue Period, which you can check out here.  As for the Ramblers themselves, they still perform live sporadically, per this 2011 article and their Facebook page.

A. The Trains
B. Fragile Child

You said it, Pure Gold! Love this 7", the Trains is one of my all time favorites!

Thank you sooooo much for this! I have been lucky enough to meet these guys and see them play live a few times over the past 20 years or so and they are not only wonderful people but incredible musicians.

Thanks folks. I'd love to experience "Trains," and frankly any other songs the Ramblers pulled out of their grab bag in a live setting. Fingers crossed.

One of the all-time great songs. I bought the 45 reissue even though I'd stopped buying vinyl, because this song demands to be played on a turntable@45 rpm, LOUD!

Thanks for the FLAC version too!!

This track -- out of all the others -- made the "Children of Nuggets" box set a revelation to me. "Trains" is such an awesome song...

Shriner's comments is perfect for how this track hit me when I first heard it on "Children of Nuggets" -- a revelation! Thank you.

As for the gentleman that wishes to be buried with iPod that plays "Trains" on an hourly basis, I just hope his loved ones included a charger in his casket.

Yeah! This is a great one. Trains is amazing! Happy to finally hear the flip side which is great.

Hey, the B-side is damn good too!

Can you re up this single?

im getting obsessed with carl rusk!

Always loved this one.

Would love a repost!