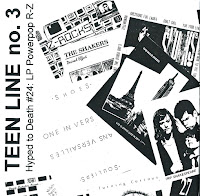 Well, it looks like you've made the first two Teen Line compilation disks I posted a few months ago enormously popular, download-wise, and I'm happy to present the third (and most satisfying so far) installment.  For those new to the table what the heck is Teen Line all about?   Essentially, the Hyped to Death bootleg reissue collective made a series of cd-r compilations featuring arcane indie/power pop acts circa late-70s through the '80s that never quite saw the light of day in the digital realm.  The curator of these packed and well annotated releases not only possesses a treasure-trove of a record collection, but more importantly the acumen for culling the choicest morsels from said wax, be it a privately pressed 45 limited to 500 copies, or something slightly more common.  In short, the Teen Line compilations are a microcosm of what I attempt to offer on this site writ large. 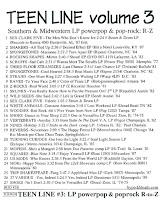 There are selling points aplenty here, including a few acts I was first given exposure to and was subsequently compelled to track down their original vinyl artifacts - The Shakers, White Animals, The Squares, and Rocking Shapes, all of whom have graced the halls of Wilfully Obscure before.  The legendary Shoes make the roster twice, with tunes from their early LP, One in Versailles.  If you're up for more classic power pop, the Spongetones and Scruffs are present and accounted for, as are the Reverbs featuring a pre-Velvet Crush Ric Menck.  There are lots of low-key profilers here that desperately deserved the exposure this disk provided - Turning Curious, The Strand, Z-Rocks, and an early nugget of gold from Trip Shakespeare.  A near-perfect tracklist that you can examine for yourself off to the left. Enjoy!

Thanks you very much!

Rad! I love these comps! Although, I gotta say that I think the better Sex Clark Five song is "She Colides With Me". The suffered from the great band/shitty name syndrome. Same with Electric Love Muffin.
http://youtu.be/gm3G88mjXoE

Is it possible to re-up the Teen Line No. 3 comp?

Hi. I've been looking for this Teen Line No. 3: LP Powerpop & Poprock R-to-Z comp, for a couple of years now. Any chance that you could reupload this, would be greatly appreciated.