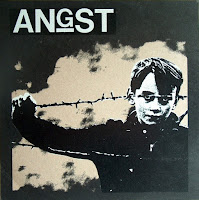 This is my fourth plunge into the Angst well, and could be the last (or if you're lucky, second to last).  I've presented no less than three LPs (namely Mystery Spot, Mending Wall and Lite Life) by this defunct trio thus far and today you're about to encounter where it all began...if you so opt to download it.  Seven concise, cheeky blasts highlight their debut ep, with the angular "Neil Armstrong" leading the charge, bearing a self explanatory title if there ever was one - in a mere 68 seconds at that.  God damn.  "Die Fighting" is bristling aggro punk that should have made Crass green with envy, albeit presented in a slightly more accessible package.  "Pig" digs into the distorto funk of Minutemen (with Gang of Four underpinnings to boot), and the concluding "Nancy" ponders a rather "prickly" premise that I shan't extrapolate on any further, ya dig?  Alright, that's enough spoilers for one ep.  Draw your own conclusions on the remainder of Angst at your leisure.

Thanks! I hope you get around to sharing that last one!

I found this tape for $1 at Caldor's in Rocky Point, NY when I was about 16 and just getting into punk. I knew nothing about the band (glad I wasn't alone). I saw the SST logo and knew Black Flag was on that label so hey, here we go. Loved it to death (literally, the tape now barely functions 20 something years later). My brother and I sought out all their other works and within about 5 or 6 years we'd found their whole discography. I'm just discovering you exposing your fans to this band, and it really makes me happy. I've always thought of them as "me and my brother's" in that weird way you think of bands you think only and a handful of others know.

Thanks a lot for posting this, it's nice to hear these again without the hiss of a beat-to-shit tape coming from the speakers!