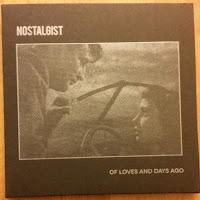 You know that whole darkwave/post-punk resurgence that everyone is either lauding, bemoaning or otherwise?  Seattle's Nostalgist aren't ersatz revivalists so much as bona fide practitioners of the form.  Following up the murky but utterly intriguing Monochromatic 7" from 2013, the newly minted Of Loves and Days Ago broadens the group's palette, exuding a sonic aptitude that ranges from And Also the Trees to Failure.

The band's first long-player commences in earnest with "Pull the Plow," fortified with a discernible vocal hook, plus fuzzy surges of gits and bass, none-too-dissimilar to the variety occupying classics of yore like Gish or You'd Prefer an Astronaut.  Just when you think these Seattle denizens might be making *gulp* commercial inroads, Of Loves... soon returns to the Nostalgist "norm" of sullen, throbbing noir rock, characterized in no small to centerpiece Asa Eisenhardt whose deep bellow dovetails seamlessly with the austere, eminently powerful tenor of his band.  It's hard not to pinpoint the telltale goth overtones permeating "Dreaming in Celluloid" and "The Void at My Feat," yet Nostalgist accomplish the task sans any maudlin or ponderous anchor.  Hardly the stuff of tranquility, Of Loves... more subdued respites, including "An Unbroken Take" breathe texture and solace into an otherwise bleak and foreboding atmosphere.   Does it hurt so good, you might ask?  I think so, and you can investigate for yourself, with the album currently available digitally and/or on CD via Bandcamp and Nostalgist's Store Envy page.  A tape/vinyl version of OLDA may be in the offing.
Posted by spavid at 6:54 PM