Having offered a critique of the first two exhaustive and massively expanded Hard-Ons reissues last week (Smell My Finger and Dickcheese), I posited that this Sydney trio's frivolous album and song titles might be to their detriment, so much so that the sophisticate music hound may draw a premature conclusion about them as soon as their eyes scan the record sleeve(s).  I'd be the last one to deny there's any sophomoric tendencies tucked inside chestnuts like "Kill Your Mum" or say, "Spew" but the Hard-On's breathless execution of just about any song they wrap their collective arms around is often so head-spinning and fun, you'd be hard pressed to single out the trio's most tawdry or misanthropic verbiage.  Head and shoulders above those concerns, the band made genuine strides with each successive release, most demonstrably in the melody department. 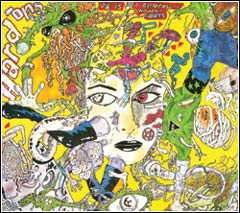 By the time Love is a Battlefield of Wounded Hearts dropped in 1989, the Hard-Ons hadn't quite ventured a quantum leap, but holy cow, "Don't Wanna See You Cry" wasn't merely hummable, you could practically get it stuck in your head - for a couple hours anyway!  Listening to copious amounts of the Ramones has consequences, and in the case of these guys it was paying off in spades, with "Missing You, Missing Me" and "Get Wet" leaving a dent nearly as wide as the aforementioned "...Cry."  Those who reveled in the rampaging metallic k.o. of Dickcheese will find no shortage of thrashy, steamrolling rancor strewn amidst the remainder of Battlefield..., like so much shrapnel after a blistering firefight.  The original twelve cut LP has been extended to a whopping five times its size on Citadel's 2013 reissue, with disk one being filled out with an alternate version of the album cut in 1988 (referred to here as Kids in Satanic Service) but scrapped in favor of what became the actual finished product a year later.  Three songs from a tour give-away 7" and a handful of demos are also present, while the second disk places the emphasis on two 1989 live shows and a Triple J (Aussie radio) live session where we even get to hear Blackie and Co. being interrogated. 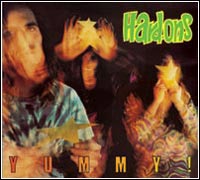 The tuneful potential disseminated on ...Battlefield came into even more melodically advanced focus on Yummy! positioning the Hard-Ons onto equal footing with Descendents/ALL.   A veritable hookfest of crunchy proportions, Yummy! lives up to it's delectable moniker.  I'm not sure where to start with this one - so much gold: "Sit Beside You," Where Did She Come From," "Raining," "Me or You," and a throng of others.  Now it's clear to me where fellow Aussies like the Meanies and Vacant Lot took so many of their cues from, and perhaps a bevy of their "colleagues" on my side of the pond - Screeching Weasel, Big Drill Car, and the Chemical People instantly come to mind, and I wouldn't be surprised if the Goo Goo Dolls didn't nab a few kernels of Hard-On's wisdom for their first two albums.  Back to the subject at hand.  Padded out to a bulging 60+ song feast, the double CD redux of Yummy! contains singles (digging the b-side "Sri Lanka" big time), the follow-up Dateless Dudes Club ep, and a gigantic trove of demos from the same period.  The boys are spoiling us big time here, and BTW, for you H/O's novices in the crowd, Yummy! is a great jumping off point.

In addition to the truckload of bonus material, these leave-no-stone-unturned reissues are also remastered and come bundled with generous liner notes penned by the Hard-Ons themselves, packed with anecdotes and an assessment of the group contemporary to the era.  They're available direct from Citadel Mailorder, Red Eye or Amazon.  Check out iTunes as well.  Below you'll find a four-song sampler of some of the songs discussed here.

Anyone has Blakie solo albums?

Not I said the cat.