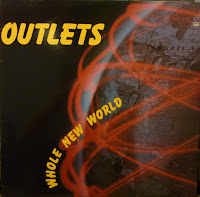 The Outlets.  Now there's a cool band name, and the band's attendant music is commendable as well.  Helmed by brothers Dave and Rick Barton, this quartet made waves in their Boston environs during much of the '80s, but nationally were a less of a draw.  Sonically, the Outlets were a competent and generally gratifying, meat and potatoes power pop proposition, who may have been a tad left of center for commercial radio outlets, but not quite edgy and nefarious enough for the punk set.  Yep, the 'ol Catch 22, but aesthetically they were in good company with the likes of Material Issue, The Magnolias, and Junk Monkeys.  Whole New World, their lone LP from the Reagan-era, was preceded by a few singles some of which conveniently wound up on this platter as well.  The Outlets reconvened in the '90s for a second album and live performances.  I'd be remiss if I failed to note that a portion of WNW was reprised on the Outlets I Remember anthology, available from CD Baby, Amazon and iTunes.  As always, if you enjoy what you hear support the band!

great stuff...saw the fellas many times here in Boston......always dependable for cool hard rocking tunes...thanks much!

I had completely forgotten about this band (not a knock on them but a reflection on me AND the number of great bands around Boston at that time). Before your post if someone had asked me, "Was there a Boston band named the Outlets?" (granted that would be a very strange question to ask) I would have said, "no". But after reading your post I remembered the name and that they were considered to be on the brink of breaking through, although off the top of my head I can't remember their songs. So, given those circumstances, looking forward to hearing this as I am sure I will recognize some favorites from the day.

And as long as we are on Boston bands of the era (1) if anyone has a video of the Treat Her Right theater show "From Providence to Sin City" I would love to see it and (2) if anyone has more Cavedogs Funtime Hour stuff beyond that on the fan comp I would also love to hear that.

Definitely a band who deserves a bigger place in music history, not like The Dogmatics.

Barton later helped start the Dropkick Murphys many moons ago.

I appreciate the comments. I had a hunch this would get some of you talking. I forgot to mention the Dropkick Murphys connection. As for the Cavedogs Funtime Hour, I might be able to help a little down the road Bruce. Thanks.

I googled The Outlets as I have been reminiscing about Boston rock since the closure, after 42 years, of TT the Bears Place, two days ago. 😭. And, lol and behold, you just posted about them. kismet!

I remember the song Whole New World when WFNX hot-rotated it in 1995. I may have seen The Outlets, can't remember, it's all a fog. Lol. They were spunky and great. I did but I Remember just now from Amazon, thanks to your link. Thank you!

Johnny Ds closing this autumn, is there anything left? The Paradise, but that was always rather corporate. No more WBCN to break rock bands, no more WFNX for the Brit underground and garage bands. No one listens to rock music any longer in the under 40 age group. I cry.

Would love a reup here!