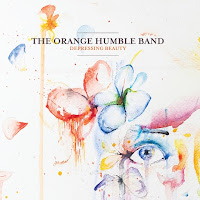 Spanning two continents, and boasting a lineup composed of former/ongoing mainstays from the Posies (Ken Stringfellow and Jon Auer), Big Star (Jody Stephens), The Lime Spiders and Someloves (Darryl Mather) and Mitch Easter among others, The Orange Humble Band is nothing short of a dream proposition, not only for the hipster indie pop cognoscenti, but for an average Joe like yours truly.  So how do you explain why this Memphis by-way-of Perth, Australia conglomerate doesn't always present itself as the logical sum of it's collected, not to mention storied parts?  Perhaps it's because the Humbles aren't trying to achieve that end, appealing as the mathematics of that formula could logically tally up to.

Depressing Beauty is their third album in literally as many decades.  To your surprise (and perhaps chagrin) this record won't rock as hard as the Posies, wield Rickenbackers as deftly as Easter's famed Let's Active, or bear even half the emotional tumult that Big Star trotted out so acutely back in their day.  Furthermore, it's a departure from OHB's riffy and hook-addled 1997 debut Assorted Creams, and it's more eclectic follow-up, Humblin' (Across America).  The common ailments of maturity that affect all of us aren't any more lenient on these fellas either, and it shows in spades on the hour-length Depressing Beauty, the collective's first LP since 2000's aforementioned Humblin.  In essence, this record is it's own tempered beast.  Nuanced, disciplined, and occasionally a little too subdued for it's own good.  As was the case with the two preceding OHB records, Ken Stringfellow serves prominently and capably as front-man, yet oddly enough Dwight Twilley figures in as one of the key songwriters - contributing little else to the actual recording than some backing vocals and guitars.  Darryl Mather is the dominant wordsmith however, providing text to a good 80% of Depressing...

The overarching easy-goes-it vibe of this record tacks more towards Burt Bacharach than say, Badfinger, but Stringfellow and his cohorts manage to flex a 'lil musculature on the opening "You Close Your Eyes," a tune you could string on a clothes line alongside some of Cheap Trick's more recent exploits.  Once this ditty passes, it's pure refinement and lucidity from thereon in.  There's a cavalcade of ballads rolling in and out like the tide on Depressing..., paramount among them "Sowannadoit," a blissful stab at '70s AM dial pop that hits the mark with polished aplomb.  Honorable mentions go to "Upon Cindy's Will" and "Conversations With Myself."  I should add that appropriately enough, many of the more delicate pieces here feature string arrangements.  When all is said and done, Depressing Beauty isn't particularly strident or brash, rather the product of a carefully measured and considered muse.


If you’re new to OHB you might also want to backtrack to Assorted Creams to really gauge the full extent of what these gentlemen have to offer.  Established fans should have no qualms about placing the Humble’s latest at the top of their "to-buy" list, and you can do just that by purchasing it from Citadel Records directly, or opt for the Amazon or iTunes route.
Posted by spavid at 4:08 PM

The Orange Humble Band's "Assorted Creams" is one of the best indie power pop albums of all time. Really great. The second LP was a big letdown for me. I don't think it had one track as good as the "worst" on "Assorted Creams" although it was a good enough "competent" job. Still, I expect I will have to get this latest one. Thanks to you for tipping me off to it, and thanks to this review (and that 2nd LP) my expectations will be appropriately lowered.

Can you re-Up the Assorted Cremes Demos?

The reason there is, as so many listeners have noted, such a quantum gulf in excellence between the first two OHB albums is that the first album was recorded in Australia by an organic band made up of Darryl Mather and a group of local musicians who worked with him for upwards of five years in some cases (and unpaid, I might add) to knock his songs into workable shape, and who get virtually no acknowledgement for their effort and input (least of all from Mather), then taken to the US for Easter and Stringfellow to add their paid contributions to.

Album #2, on the other hand, saw Mather - by now a financially successful, high profile sports manager at home - recording in the US with all the big name indie cred artists his money could buy, and churning out, in a couple of months, a record that could very well have been credited to Darryl Mather and the Hired Hands.

Thanks for your comments folks. I may not always get around to responding to them, but they all pass over my eyes and I appreciate your commentary.

I never shared the demos you speak of Karmahum, but you can try asking the folks that run this site as they were the ones that put them up:

Nice insight billybadbum. Had no idea that Darryl Mather became a sports mogul (from the sound of it anyway).

For what it's worth I really like 'Depressing Beauty. True it's not a power pop classic like 'Assorted Creams' but it's a very strong record with plenty of hooks and melodies, excellent songwriting, playing and vocals. This album gets better and better with repeat listens and sonically it couldn't be much better! Overall the new album is worth your time and money (imho).

BTW, Spavid, do you ever get on slsk any more? I've had some stuff queued from you for a while, but I never seem to find you online...

I'm on once a week at most. I still love slsk. A great resource.

Could you re-up this? There aren't any download links that I can see.