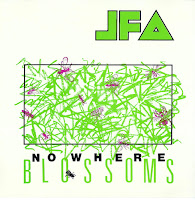 In the early to mid-80s JFA staked their reputation as a speedy skate punk combo, but in 1988 a funny thing happened on the way to the halfpipe.  Tamping down the hardcore thrust while propping up the idiosyncrasy factor to ten, you might say Nowhere Blossoms is the band's Into the Unknown or Smiley Smile.  True, they had tinkered with keyboards on their self-titled 1984 album, yet Blossoms is startlingly peppered with...pianos and organs.  "Pink Slip" packs a rumblng wallop like the old stuff, but pretty much anywhere else the needle lands this ain't your older brothers JFA record.  Try as I might, it's hard to make any overarching generalities about Nowhere Blossoms.  There's out and out weirdness, like the whimsical closing instrumental, "Turkey in the UFO," and "Signifyn' Monkey," apparently spieled out by a street performer.  A James Brown cover merely adds to the confusion.  No straight up pop tunes unfortunately, though my hats off to the dudes for at the very least attempting to carry a tune.  In fact, I'm not really sure if I'm that endeared to this record myself, but it's interesting and out-of-print enough to put out there.  As for the acronym, it stands for Jodie Foster's Army, if that means anything to you.  Should you opt to download this I should mention the tracklist on the tray card is a bit scrambled.  A corrected one is below.

I've never listened to this - I loved their "My Movie" EP, though