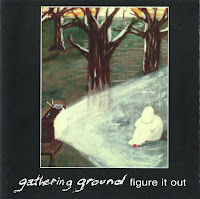 I thought this would be apropos in light of this week's Mystery Monday.  Gathering Ground.  What can I tell you about them?  Well, they were from Buffalo and this ep was their only release (except maybe a compilation track or two)?  Back then we called it "post-hardcore," but anyone who first got a whiff of them in the twenty-first century would liberally and unflinchingly term G/G as emo.  Not a tremendous "buzz band," but a lot of people were hooked on this record, which from what I recall sold in the thousands.  Pretty melodic stuff, akin to their erstwhile contemporaries Samiam, Sensefield, Knapsack and Garden Variety.  " Bluegreygreen" and "Tumble" entice as effectively as they did two decades ago.  Figure it Out was available on CD and 7."  You can check out more Gathering Ground goodness and the exploits of some of their related projects on Soundcloud.

Love this style. Excellent stuff! Thanks for sharing!

Emo plus "pretty melodic" equal me listen. I'll let you know what I think.

I used to play "Swingset" frequently on my local music show on WGSU in Geneseo back in '96 or '97...thanks for sharing!

Thanks for inspiring us to plug back in and fire up those amp tubes again. Our good friend, Aaron from The Sheila Divine out of Boston, saw this very post and forwarded it along to me. We had a chat about old times and current happenings and orchestrated a Gathering Ground comeback to support The Sheila Divine record release show in Buffalo. SO, if anyone is free this Saturday, 10/10/15, please stop down and let's catch up... after 18 years. This particular GGRND line up hasn't shared the stage together since summer 1996 while opening for Texas is the Reason and Sensefield. #nerves

That is beyond awesome! Thanks for the heads up on that, and assuming the show hasn't sold out I'll be in attendance. Yes, it's been way to long. Cheers!

Should be ok, but presale tickets are starting to move. last I saw it was at about 80 of a 120 capacity. Wouldn't want you to miss out. Thanks again. Come say hi. ~Ed

Hey Spavid. Please add this one to your re-ups. Thanks much for all the amazing music!