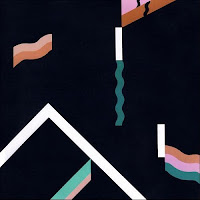 It's summer.  The living should be easy.  So what am I doing with a batch of murky at best sounding prototypes for a difficult album by an even more difficult band?  The hell if I know, but it dawned on me yesterday that in the past six years I've been doing this I have yet to dedicate a megabyte of space to Wire.  If anything else, we can chalk that up to the wide availability of the Newman/Lewis/Gotobed/Gilbert back catalog.  Perhaps subconsciously, I also assumed that my plethora of live Wire material would be lost on those of you who were unfamiliar with their repertoire, and a rehash for you die-hards who've imbibed enough concerts by them already.  And speaking of Wire die-hards, many aficionados of the group's initial volley of 1977-79 albums (Pink Flag/Chairs Missing/154) regard the latter to be an oblique masterpiece.  154, with it's chilly tenor, idiosyncratic instrumental gestures, and abundant themes of alienation, is quite bluntly not for everybody.  Furthermore, it's not the best place to delve into for the uninitiated.  On the other hand, those of you with a sincere appreciation for said record might be stimulated by this bootleg, featuring nascent attempts at nine songs that would eventually occupy it, not to mention an additional song (track 1) that ostensibly never made it past the rehearsal stage.  The fidelity is weak and some of the lyrics aren't completely together yet, but personally, my only pet peeve is that we aren't treated to a run-through of my fave 154 cut, "Map Ref. 41°N 93°W."

Not one byte of Wire is surely a travesty, good on ya to make amends :)

Thanks man this is interesting.

I'm happy to snap up any off-radar Wire recordings you care to share... keep 'em comin'! :)

This is amazing stuff, thanks a bunch and keep them coming. :)

It's not working. Could you please reup?

Holy crap this is great! Thanks!

Any chance of re-up? Thanks in advance?