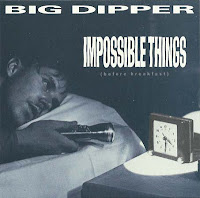 Ok, nothing particularly revelatory here, even for Big Dipper fans, if only because this four-cut promotional disk doesn't contain any original non-LP material.  Nope, instead these indie turned major label rawkers throw their lucky recipients three hastily recorded covers - all live from the sound of it.  The tracklist says all you need to know.  "Impossible Things" is culled from 1990's Slam LP, hard copies of which are awaiting you in your local bargain bin, or you could do the considerate thing and support the band via iTunes or Amazon downloads.  I'd be remiss if I failed to meant that Big Dipper reunited recently and equipped us with a new album in 2012, Crashes on the Platinum Planet.  If you're up for more fun, check out Merge Records handy reissue of Big Dipper's Homestead Records catalog.

hello , the link was deleted, can you re-upload this Ep again please?

Hello , the link was deleted, can you re-upload this Ep again please?