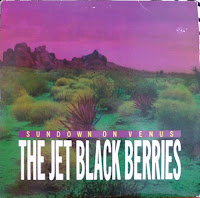 Much like the New York State capitol, Albany (four hours due east) Rochester can't boast much in the way of musically renown acts.  Back in the '80s however the Flower City gave rise to a combo called New Math, a noir punk/alt act who put out the classic KBD single "Die Trying," along with a pair of bloody great eps, They Walk Among You and Gardens, both of which were sizably buttressed by Mark Schwartz's whirring organ lines.

Creatively, New Math developed a change of heart, one that pulsed in the direction of Americana rock, or more bluntly, cowpunk.  With the original lineup intact the group settled into a new moniker, Jet Black Berries, and by 1984 were snatched up by national indie imprint Pink Dust (technically a division of Enigma - don't get me started as to who some of the Berries labelmates were).  Under the newly christened name the quintet issued Sundown on Venus, a record steeped in spaghetti western motifs coupled with an interstellar bent, a healthy dose of charm, and outright catchiness at moments.  At least that's how the first half pans out.  Side two tamps down on the twang almost entirely, mining a thematically similar, albeit pessimistic vein, with Schwartz's docile organs once again permeating the background.  The initial pressing of Sundown... came bundled with a third album side, featuring six additional songs wherein the Berries occasionally deviate a bit from their usual schtick.  Side three caps off with reworkings of two New Math staples, "The Restless Kind," and "They Walk Among You."

Two more JBB album's would follow, Desperate Fires in 1986, and Animal Necessity two years later.  In the late '00s the Berries regrouped with the same lineup, minus singer Kevin Patrick.  In his place came young gun Johnny Cummings, who lent his voice to the fourth JBB album, 2010's Post Modern Ghosts.  Ironically, much of it was comprised of new readings of vintage New Math songs, which by the way translate perfectly well some thirty years later.

I had this album. This and Plan 9 got a lot of play back in the day.

Anyway to reload these? Thanks either way. I had this on vinyl.

Could you possibly re-up this? Thanks ever so!

Please add this to your re-ups. I am always amazed at the rare music you have shared. Thank you!