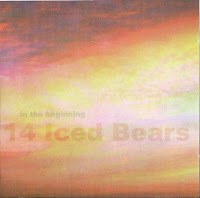 14 Iced Bears association with Sarah Records may have spanned the arc of one 1988 single, but the band's catalog (particularly the early portion) suggests their involvement with that coveted British imprint should have been a lot more enduring.  With a sonic aptitude that bridged the not-so-gaping divide between nascent Primal Scream and the Wedding Present, the band (Sarah Records or not) manged to pump out more than half a dozen singles and two albums between 1986-91.  The currently out of print In the Beginning compilation reprises the first three of the Bears 45s, which many longtime fans regard as their halcyon recordings.  As if those ten ditties weren't sufficient, ...Beginning is fleshed out with two stellar Peel Sessions, a pair of not-so-hot live cuts, and just as many demos originating from 1985.  Not as consistently saccharine as their C86 brethren, 14 Iced Bears weren't shy about upping the dissonance ante, especially on their premier single, "Inside."  As mentioned, in addition to short form vinyl releases, the group is survived by a couple of albums, a 1988 self-titled effort, and 1991's Wonder, both of which are available for purchase on iTunes and Emusic.

This blog (http://ergofelixculpa.blogspot.mx/)has been made ​​extinct administrator Underground a Descarga. We can recommend us, we already have done.
Thanks

Huge, gigantic request to you: my hard drive crashed last week, before I backed up to the point when I had gotten the JEW-Futures demos, which was great! Any possibility of a reup on this? Thanks a bunch!

Thanks for the heads up Gavin!

Hi, can you reup. Thanks

The link doesn't work. Could you fix it please?