File under Windbreakers: Howard and Tim's Paid Vacation - I Never Met A Girl I Didn't Like mLP (1985, Midnight) 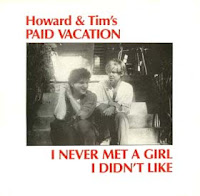 This seven song platter was a one-off collaboration between Tim Lee of Windbreakers renown, and Howard Wuelfing, a music journalist and alumni of the D.C. based Slickee Boys and Nurses.  From what few online critiques I've conjured up, I Never Met a Girl... is regarded as unremarkable, but it's very much to my liking.  Three songs here function as demos for future Windbreakers album tracks, and the overarching gist of the Lee/Wuelfing pairing is in keeping with that combo's strummy, mid-tempo modus operandi.  A cover of the Alex Chilton/Tommy Hoehn penned "She Might Look My Way" doesn't hurt in sweetening the power pop pot.  As is so frequently the case, Trouser Press nails this disk better than yours truly could:

The low-budget Paid Vacation LP Lee cut in 1985 with Howard Wuelfing (an ex-Slickee Boy bassist who led the Washington-area Nurses in the late '70s and then worked with Half Japanese) offers sketchy previews of three Windbreakers' songs: "Run" (from Run) and "Fit In" and "Forget Again" (from A Different Sort). Besides a cover (Tommy Hoehn and Alex Chilton's "She Might Look My Way"), the LP also contains Wuelfing singing his own originals, one of which ("The Week You Were Mine") is quite lovely. Unfortunately, muffled sound and indifferent performances limit the value of this seven-song artifact.

A couple more brief assessments can be located here.  Special thanks to the folks at the sadly long-defunct Feelin' Kinda Froggy blog for originally ripping this record.

"Windbreakers" was a pun. It meant "farts."

Cool record, I've always liked the Windbreakers. Even though it's a little on the long side, "That Wont Make You Love Me" has always been my favorite. It's a classic, primitive lo-fi pounder! Thanks for the post.

Hello! the link doesnt work anymore and i cant find it somewhere else to download this EP. Can you please upload an new one?

Any chance for a re-up? I own this on vinyl but would like it digitally. Thanks in advance! :)

"That Won't Make You Love Me' is a pinnacle of 80's garage-psych.