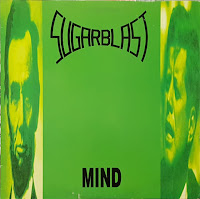 From the sound of it, this little spoken of UK quartet had an ear for a couple of their contemporaries, namely Mega City Four and the Senseless Things. Less vigorous than the almighty Megas, Sugarblast nonetheless had a keen melodic acumen, buttressed with an enticing cavalcade of ringing chords and bright vocals. No filler takes residence in this Mind, though the band opt for a curious, galloping rhythm on "Believe," and for the concluding "Stabbed" they get the notion to lay on the wah-wah pedal. This ep and the subsequent Sunny Outside ep (released that same year) were bundled onto one disk, though it appears Sugarblast's slim discography was an import-exclusive affair.

I saw them play with another band from Workington (there can't have been many), Sensitize, at the Jericho in Oxford back in 1991/92. Think I did a kind of interview with them before the show. Pretty good, though a sparse audience on a midweek evening.