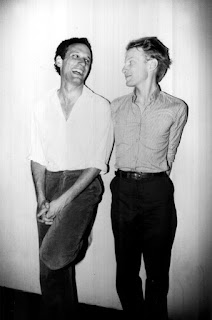 Say it's the late 1970s.  You're in a promising but utterly struggling Los Angeles power pop outfit called Bates Motel. You play gigs frequently. You cut demos. Despite no shortage of talent record companies just aren't biting the line.  As fate would have it you and your bandmates are fans of Sparks, who by this stage in the game are established auteurs and visionaries in electronic music around the world. You and one of your fellow com-padres in Bates Motel eventually get up the gumption to approach brothers Ron and Russell Mael of Sparks to check out one of gigs at a local dive to sell them on the idea of producing your humble but hungry outfit.  The Mael's accept your invitation, but instead of them working for you, they invite you to work for them as Sparks new rhythm section.  How could you possible decline?

That in a nutshell was the unlikely alliance of Bates Motel's David Kendrick and Leslie Bohem with a (slightly) higher profile artist who at this point in their already storied career have racked up lauded albums like Propaganda and Kimono My House, among roughly half a dozen more LPs.  This merger officially put to pasture Bates Motel, and moreover buoyed Kendrick's and Bohem's confidence.  Couple this with the fact the duo still had their own creative juices flowing, and no shortage of motivation to start a new combo parallel to their gig in Sparks, dubbed Gleaming Spires. Thus began a six year odyssey that would grant the aforementioned gents the opportunity to record three, creatively distinct albums, earn themselves a minor, but still coveted new wave hit forty years after the fact, and gain them national if not international renown.  Omnivore Records have once again done yeomens work with model reissues of the Spires entire catalog, almost all of it on compact disk for the first time, featuring generous bonus material and thorough annotation, right down to song-by-song insight from Les and David themselves. 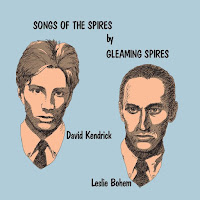 As debut albums go, 1981's Songs of the Spires was actually more of a glorified demo. Produced by a then emerging Stephen Hague, the album's nine songs were really designed to be shopped around so to speak, more as a means than an end. A copy landed of the tape landed on the desk of Posh Boy Record's honcho Robbie Fields who was so floored with what he'd heard, he insisted that he release the Spires demos as-is, against Les and David's wishes to re-record the tracks so they'd be more presentable to mainstream ears.  Ironically, Songs of the Spires didn't bear a discernible sonic adherence to Sparks, despite much of the music being saturated with keyboards as much as guitars. In fact the record's mid-fi production qualities and sardonic pop acumen more closely resembled what Todd Rundgren was churning out with Utopia at the time - and to a much more diminished extent, Gary Numan.

Unlike the dude that unlisted from the Tubeway Army, the Spires weren't merely artful but genuinely fun. Case in point, the irresistible "Are You Ready for the Sex Girls?" Sounding like the most clever and lascivious four minutes the Tubes neglected to commit to tape, local "new music" peddlers KROQ FM made sure the tune was seared into the noggins of the greater metro-L.A. region, and it quickly and endearingly became Gleaming Spires signature song.  It took a deft set of hands and mouths to concoct the likes of such a banger without straying into novelty territory, but this duo were up to the task. The other close brush with a "hit" from this era/album, "How to Get Girls Thru Hypnotism" was issued as a proper single. Deeper cuts on Songs... proved to be nearly as rewarding, namely the stark "Big Hotels," and the persuasive enough ballad, "While We Can." Songs of the Spires really wasn't one of those untouchable debuts per se, albeit the Spires were never able to surpass it in terms of sheer consistency.  We're treated to no less than ten supplemental tracks, including the entirety of the subsequent Life Out on the Lawn ep from 1982.  It's three songs were more left-field, not to mention less memorable than the album, but still approachable.  What's especially revelatory here are half a dozen songs from the Spires/Sparks precursor band stated above, Bates Motel. For a traditional power pop act these fellows were surprisingly diverse and gave rise to the stunning "The Way Marlena Moves" and the sassy 'n raw "Only the Young Die Young." 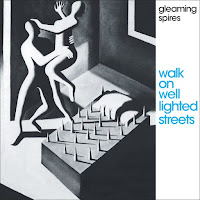 Fast forward to 1983.  Time for some changes in the house of Spires, and fairly significant ones at that. For their follow-up, Walk on Well Lighted Streets, the duo had now doubled in population to a quartet, adding Bob Haag on guitars and Jimbo Goodwin on keys. Second, they moved to a much more sizable label (does PVC Records ring a bell with anyone?). Bog Hague was re-enlisted as producer, but I'm sure it soon became evident to him that he was dealing with a demonstrably different ball of wax than the lads who cut Songs of the Spires. WOWLS marked the band's first legitimate grasp for the brass ring, with Hague modernizing and honing their technique enabling the Spires to compete with the A-list.  No, they hadn't morphed into Duran Duran or Oingo Boingo, but the album depicted to your right boasted a similar finesse you'd encounter with many of the group's synth pop/top-40 crossover colleagues. As such, ...Streets doesn't falter so much as iron out the creases and kinks of the more acerbic tones and ironic prose that made their debut such a treat.  The Spires were still considerably far from generic, but they were clearly en route to more routine environs.  "A Christian Girl's Problems" is something of a respite for more established customers, hearkening back to the edginess of the first album, while "At Together" is curiously tension-addled and prickly. There's a veritable album's worth of bonus tracks to be had, many of them culled from the 1984 Party ep, an indulgent and perhaps loosely satirical spin on dance pop of the Spires era. "Funk for Children" packs a more propulsive groove than you might expect, and "Brain Botton" is delightfully surreal.  Also in '84, the band's increased visibility landed them on the Revenge of the Nerds soundtrack with two numbers including a full band reinterpretation of "Are You Ready For the Sex Girls?" which sounds significantly blunted stacked up against the tune in it's original incarnation. 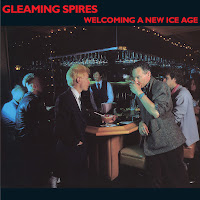 Gleaming Spires last gleaming, so to speak, arrived with their third album, 1985's Welcoming a New Ice Age. If there's anything to be said about this LP writ large is that it's hard to cast generalities as so many of the songs seem to occupy their own slice of airspace.  The commencing "Mercy" is a bold, taut pop-rocker wielding genuine power chords, accented with just the right allotment of keyboards. It could realistically compete as their finest moment.  The title piece and "No One Coming Over" exude appealing new-wave affectations, without getting too heavy handed.  Further in, "What's Coming Next" might have been a more suitable fit for the previous album. "Unprotected" seems to aim for a certain degree of grandiosity but misses the mark by several notches.  For the concluding "Harm" the band tossed in everything they had including fretless bass, tribal percussion, found sounds, and treated vocals.  An offbeat but fitting way to put a nightcap on both the album and their career.  The bonus material here does little to supplement ...Ice Age, but is likely to fascinate the few diehards in attendance.  Appended are five compositions that intended to compose a good chunk of the soundtrack to School Spirit, a cheesy teen-sex romp that apparently went straight to video, with said soundtrack never coming to fruition.  The tunes are as pandering to the target audience as you might expect, and don't get me started on the near-monstrosity that is the Spires' ridiculously forced rendition of Elvis' "Suspicious Minds."  Then again, it was the mid-80s. Rounding things out are couple of numbers from a punky, one-off project dubbed Eleven Blue Men, comprised of Les and David alongside 45 Grave's and Dream Syndicate's Paul Cutler.

All three Gleaming Spires albums are available directly from Omnivore with compact disk and download options, and ditto for Amazon.

Thanks for the good tip from the band, which i still don't know.

You can write an article very much. Thank you for making a great article to read.
ហ្គេមបាញ់ត្រីអនឡាញ