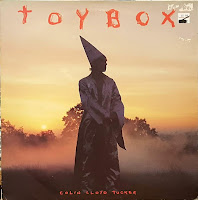 Little did I know a few months ago when I posted the Plain Character's Invisible Yearnings album I also had stashed away a then un-listened to used copy of a solo record by one of the Characters, Colin Lloyd Tucker, a mercurial and an avant-inclined musical sort, who's had his fingers in many a pie since the early '80s.  As with the aforementioned entry, I'm once again going to direct you to Nothin' Sez Somethin' blog for more pertinent details on Colin's extended body or work, but I'm going to concentrate specifically on his debut album here.

From my vantage point, Toybox is a conceptual piece, the gist of which being of a fictitious and fanciful nature, minus any real heavy-handedness.  Still, it's sophisticated stuff that doesn't often skew toward conventional pop/rock constructs.  Instead, think Syd Barrett or even Robyn Hitchcock's more oblique handiwork (in and out of the Soft Boys).  He shoehorns a few Bowie-isms in too, but perhaps my radar is honing in on Colin's timbre here, any likenesses to may be a sheer coincidence.  For Toybox, our protagonist doesn't bait you in with obvious hooks, rather he opts to finagle with texture, temperament, subtle mystique.  If you're salivating for something as immediate and enticing as say, Ziggy Stardust, or the Soft Boys' Underwater Moonlight, I'll break your heart right here and now.  Nonetheless, Colin is a stickler for wearing his influences on the sleeves of his wizardly garb - and he dispenses them to engaging effect on "Rock'n Roll Pinocchio," "Bat Watch" and  "Casey's Last Trip." In the grand scheme of things Toybox is an acquired taste worth acquiring.

love it - was not aware of this at all, but its great. To me, its got an early Sparks feel. Definitely on the "relisten many times" pile.
Thanks
Chris

Color me intrigued -- thanks!