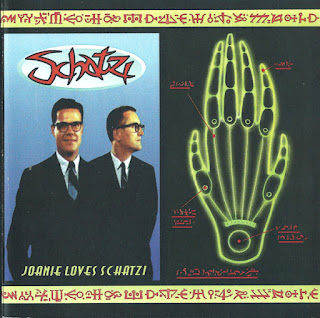 It hasn't exactly been smooth sailing in Wilfully Obscure world this week.  My "rig" for conveying vinyl to a format obtainable in ones and zeroes simply wasn't cooperating with me, forcing me to ditch a couple of titles I would have otherwise fondly shared.

Luckily I had a backup ready to go.  Way back in 2010 I lamented not being able to locate an original copy of a very obscure locally released title by a band that grew very near and dear to my heart in the early '00s, Schatzi.  It took the better part of TWO DECADES for me to finally obtain a physical incarnation of Joni Loves Schatzi, the 1998 debut from the band in question. Yes it's merely a jewel case with an aluminum coated circle of plastic tucked within, but it felt like a remarkable effort after so many years of hunting and making hundreds of web queries.  And here it as at a superior bitrate with scans of the entire booklet.  The original 2010 write up is below.  I'd be neglectful if I failed to mention Schatzi guitarist Monte Williams fell victim to a flood in the summer of 2020.  R.I.P.

An Austin, TX outfit called Schatzi made the "Dubya" years at least a little more tolerable with two choice releases on Mammoth Records - the Death of the Alphabet ep in 2001, and the ensuing long player, Fifty Reasons to Explode a year later. Marrying seismic hooks to booming power chords, a la '90s Weezer and Smeared-era Sloan, but with even smarter songs than both, Schatzi possessed a winning formula, but received inadequate exposure (BTW, Fifty Reasons made it into my top-95 albums list of the decade). The band went their separate ways not long after some 2003 recording sessions and a national tour with the Ultimate Fakebook, but even after their demise, I was starving for more.

Via their defunct webpage, I learned of a pre-Mammoth Records release, Joanie Loves Schatzi, that the quartet issued on their own Humongous Fungus label. To this day I have never come across a copy of this unspeakably impossible to locate disk, but about two years ago I was fortunate enough to bag high quality MP3s of the entire album, which I'm sharing with you today. Joanie... doesn't scale the heights of their later releases, but a respectable and worthy debut nonetheless.
01. Nadine
02. Green Velvet Neckbrace
03. Dirty Room Lament
04. Selfish Please
05. Snowflake
06. Stalking The Girl (With Wintergreen Stockings)
07. Acetaminophen
08. All
09. Surrogate Savior
10. Laika
11. Smashplate
12. Radiate
13. Mr. Kent, You're Out Of Gas

What a great fathers day present. Thanks for these hard to find, obscure titles.

Thank you for sharing this rare gem with us!

What a great sound. The guitars and drums are massive, just a really great recording