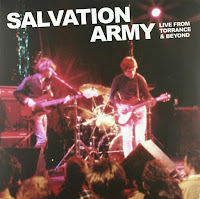 Yesterday was Record Store Day (technically the first of two 2021 "drops" thereof).  In the past I've occasionally shared purchases from prior RSDs, and I'm following suit this year with a title I camped out in line for at 4 a.m. on an unspecific Saturday in April of 2019.  Fans of L.A.'s The Three O'clock, long defunct but insurgent innovators of the so-called "Paisley Underground" movement in the mid-80s, might be aware of the precursor to that band, the Salvation Army.  A name change was forced upon the trio for very obvious reasons after their LP surfaced in 1982, and soon thereafter the Three O'clock was born with the threesome eventually expanding to a quartet, not only epitomizing said mini-movement, but to a certain extent the burgeoning new-romantic scene itself. 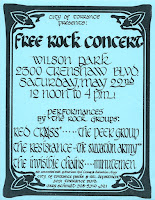 The Michael Quercio-helmed Salvation Army were well received in their native southern California and were just starting to make ripples nationally by the time their self-titled debut arrived.  To give you an indication of how far the group's popularity had progressed, this live performance cut in May of 1982 found the band sharing a bill with two other very significant up and coming contemporaries, Red Cross (later Redd Kross) and The Minutemen (see a replica of the gig flyer to your right). If the Three O'clock veered to psych-inflected new wave, S.A. bore more of a punky sheen, reflected in this brief but delightfully raw set.  The performance commences with with two of their album's most convincing songs, the hooky "She Turns to Flower" and the driving two-minute salvo, "Upside Down."  In the banter that ensues just prior to launching into a cover of Pink Floyd's "Lucifer Sam," Quercio encourages the audience to engage in wanton free love, a la Woodstock (after all this '82 gig was an outdoor show).  In between another wise choice of a remake (The Byrd's "Feel a Whole Lot Better") the band previews two soon-to-be Three O'clock fan favorites "Marjorie Tells Me" and "(With a) Cantaloupe Girlfriend." There's a mere eight songs all in all here, totaling roughly 22 unbridled minutes making for an enjoyable snapshot in time.  The album was said to released in a limited edition of 650 copies, a few of which can be obtained on Amazon...and if it's to be believed, Target online.

That's really good news.
That there is a live recording here almost borders on a miracle. Thanks !

By the way: I got BRAKES as an lp yesterday. I wanted to own this as an lp
and not just as a recording because it was cheap too. I really like it. Typical end 70's music.
Was a nice discovery, especially since i had never heard of the band before.