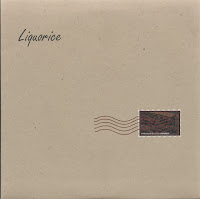 Back in the mid-90s, a lot of us who indie folk who got off on Tsunami's guitars-y, but constructive angst (and even front-woman/wunderkind Jenny Toomey's pristine lounge-pop spinoff supergroup Grenadine, entailing Unrest's Mark Robinson and Eggs' Rob Christiansen) were a bit taken back by her third simultaneous foray, Liquorice.  Perhaps she was multitasking a tad much in 1995 and our brains were fried on Toomey-overload.  More likely though, Liquorice were too subtle and refined to spark the visceral charge we were so accustom to hearing from her.  Alongside her telltale vocal and guitar tones, the trio was composed of fellow strummer Daniel Littleton, who was Toomey's co-conspirator in the pre-Tsunami combo Three Shades of Dirty, and shortly thereafter, Slack, both of whom left behind little known cassette releases as evidence. Littleton would eventually be renown for his role in Ida, while drummer Trey Many rounded out the trio that cut this single.

In music industry-speak Liquorice didn't have much "furniture" populating their humble and relatively serene parlor, relying predominantly on acoustic motifs and delicate interplay, albeit there's an oblique and slyly dynamic tenor to this single's centerpiece "Stalls."  It's five and a half minutes of Toomey's indigenous stripe of tension and texture that's downright rewarding if absorbed in multiple doses. There are two b-sides, the downcast but affecting "Artifacts" featuring Littleton on the mic, and the hazy, ambient-esque "Squawk of the Town."  Liquorice followed this 7" up with the considerably more widely  circulated LP, Listening Cap on 4AD Records.

A. Stalls
B1. Artifacts
B2. Squawk of the Town

Although it's not credited on the sleeve, and it's almost unrecognizable as such, "Squawk of the Town" is actually a cover of "Talk of the Town" by the Pretenders. Or at least it's Jenny Toomey singing that song a capella over some Warren DeFever drone sounds.

So THAT'S what it was. Didn't pick up on that Casey. Thanks for tipping me off and being so observant.

Jenny's solo album "Antidote" is worth seeking out, I think it is the best thing she ever did

Great Post
Really happy to say, your post is very interesting to read.
Thank you so much and good luck for the upcoming post.
Sugar free licorice

Thanks for sharing such an interesting blog. Also check out this profile cps test. It provides information about the CPS test. Share it with your friends and challenge them.