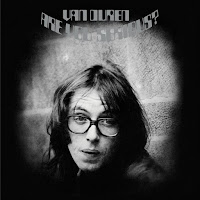 2019 saw the release of Waiting, a documentary of an unlikely subject - "small of fame" singer/songwriter Van Duren, who came to prominence...well, never to be honest, at least as far as pedestrian ears were concerned.  Nonetheless that didn't stop two Johnny-come-lately Aussie film entrepreneurs from tracking him down decades after he made his most notable records. Van Duren is as renown for his connections with Big Star alum Chris Bell and Jody Stephens (and technically Big Star themselves when they were on their last aching legs in Memphis circa the mid-70s) just as much for his first two overlooked but genius solo disks Are You Serious? (1978) and Idiot Optimism, intended for a 1980 release, but only seeing the light of day nearly twenty years later via the Japanese imprint, Air Mail Records.  Accompanying Waiting was a quietly released soundtrack on Omnivore Records, drawing largely from the aforementioned albums, leaving out tons of key album tracks. Whether you were fortunate to be cognizant of Are You Serious? when it initially came out, or merely became infatuated with Van Duren's music by virtue of the film some four decades after the fact one thing is for certain - you wanted the whole picture.  You're in luck, because Omnivore has made both Van Duren solo records in their entirety available again.

Emanating out of the speakers like a wizardly and often soulful amalgam of Paul McCartney, Eric Carmen, Emitt Rhodes and Todd Rundgren, Van Duren's debut, Are You Serious? not only professed his influences on his sleeves, but functioned as a subconscious declaration that none of the prevailing trends of the day - disco, punk and increasingly staid album rock barely held a candle to well-composed, deftly crafted pop music, be it conveyed on guitar, piano or both.  Even if ...Serious? had been whittled down to a hypothetical single of two heartfelt ballads, say "Waiting" and "Positive (Wedding Song)" Van Duren's could have cemented his reputation right there based on his melodic strengths and romantic intuitions.  But he proves himself to be far more than a mere piano-pumping balladeer, with the remainder of his debut evidencing itself in a myriad of motifs and textures.  "Grow Yourself Up" is a buoyant uptempo feast of hooks and sass from the word go, sounding like the greatest thing the Raspberries left out of their repertoire, while "New Year's Eve" could have passed for an outtake from Big Star's Radio City had Chris Bell stuck around for a second LP.  In the forty year+ rear-view, Are You Serious? is a doggedly period sounding record, but despite a lack of studio innovation Van Duren more than gets by with a deliriously strong and capable selection of songs, any one of his higher profile contemporaries would have gladly staked as their own. 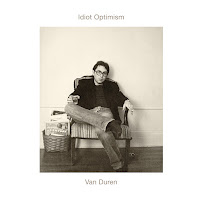 ...Serious was met with ample positive acclaim and a respectable amount of airplay upon it's '78 release, but it didn't cast a wide enough net to grab the audience it deserved.  If that record was a custom fit for the AM dial, it's follow-up, Idiot Optimism was it's FM-ready analog.  Tracked over the span of 1978 to 1980, IO, with it's bolder arrangements and loftier production values sounded like a veritable radio hit - and it likely would have been if it ever came to market. Slated for release in 1980 on the same indie label, Big Sound that was responsible for Van Duren's debut, Optimism languished on the shelves for a good two decades for some curious reasons laid out in the album's liner notes.  Nonetheless. it was to the detriment of not only the man in question but millions of potential fans. Despite sounding firmly rooted in the mid-70s, his should-have-been '80 sophomore effort was a doubly more lucid and state-of-the-art affair that it's predecessor, and boasting an even bigger sonic debt to Rundgren, Optimism offers sophistication in spades, and often flirts with functioning on a yacht-rock tier of aptitude (not necessarily a detriment in my book).  Armed with memorable numbers like "Tennessee, I'm Trying," and the muscular and McCartney-esque "Woman Needs Man Needs Woman," the album also manages to pay tribute to friend and collaborator Chris Bell, by way of "Make a Scene," a then-unreleased Bell composition - and boy, does Van Duren nail it!  Song for song, Optimism is both a marked progression from, and a fitting follow up to Are You Serious?  And at long last, both albums can finally be heard on a wide-scale basis in both digital and physical iterations, with Omnivore Records and Amazon being your most immediate and recommended options.
Posted by spavid at 9:53 PM

I still remember reading a brief review by James Spina in an old issue of Hit Parader in like, 1978 or so, and, agains ALL odds, somehow found 'Are You Serious' in suburban Philadelphia, who knows where.....a melancholy favorite to this day!!!!!!!!