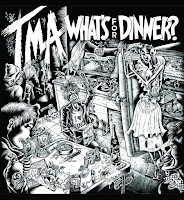 I made my acquaintance with New Jersey's long departed TMA for almost thoroughly superficial reasons - the eye-catching sleeve of their first album, 1984's What's For Dinner?  Ironically, not the album jacket depicted to the left, but the original cover which featured a full color illustration of a dinner plate (which could also pass for a turntable) with a curiously distorted fork and knife atop it.  The record in question, along with it's follow-up, Beach Party 2000, and an accompanying EP (Just Desserts) on top of that, have all been reissued digitally and on gorgeous splatter colored vinyl by Left For Dead Records as a limited edition box set, featuring radically retooled album art.

Beyond the sharp cover was music (imagine that!) - twenty songs to be specific...and given that a 12" side of wax usually housed five or six tracks WFD? stacked in a staggering ten on each partition.  In case you didn't see where I was going, TMA specialized in unadulterated hardcore punk, so flipping speedy and misanthropically bratty that the average timespan of any given song clocked in around ninety seconds - just enough time to get you into the kitchen to pop your "yellow-food" TV-viewing victuals out of the microwave and land you back onto the living room couch.  At this point in their tenure, TMA had little in common with their more renown contemporaries on SST Records or even their home state's recently defunct Misfits.  No, there wasn't really anything artful or visionary to TMA's shtick, but their blistering, slam-you-in-the-face ferocity made them a force of nature unto themselves, loosely drawing inspiration from virtually dozens of hardcore punters of the day, with vague resemblances to the Circle Jerks, and less so the Germs.  Dinner's songs were overtly topical in nature, philosophising not merely on what Mom's prepping on the stove come supper time, but on even worldlier concerns...like having the hots for Nancy Reagan, being perpetually broke, and romantic fantasies involving street urchins.  Heck, they even beat Husker Du to the punch by a good year via their cover of "Love is All Around" (the Mary Tyler Moore theme). The stuff of sophistication and charm for sure, all dished out in startlingly rapid and brusque fashion that manages to insert no small quotient of fun along the way.  Dinner's new black and white sleeve, commissioned by Bruce Carleton, is excruciatingly detailed to a fault, chockablock with an array of dysfunctional and exaggerated scenarios. 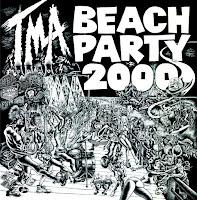 So what do you do for a follow-up if you're TMA?  How about ditch your original frontman (David Oldfield), reduce yourself to a trio, and adopt a more measured and poignant modus operandi that makes a break for nuanced post-punk some three years later?  Along with the band's acronym realizing it's true validity (a letter for each member: bassist Tom Emanuele, guitarist/mic fiend Mike Demko and drummer Al Rosenblum) TMA's sophomore disk and parting shot, Beach Party 2000, finds them making a discernible progression from hardcore, without abandoning the maladjusted subplot entirely.  Melody finally squeezes it's way into the picture frame, with sweeter guitars and vocals that approach a conversational level (if only intermittently).  "What Happened to You?" and "Feel Like Hell" aren't just a solid fit for slamming about to in some grimy dive, but double as a soundtrack for the half pipe as well.  Elsewhere, the dark hue of "Joe" occupies a unique terrain, and the post-hardcore sonic environs of "Hipster" smack of SST-era Husker Du guitar textures.  The overarching effect of Beach Party 2000 is similar to what 'reformed' punks like Agent Orange, The Zero Boys, MIA and Die Kreuzen were attempting at the same time, and TMA's broadening prowess really spoke volumes.  A damn fine way to go out.

Released in 2017, but tracked all the way back in '83, the Just Desserts EP (taking up a 7" in the vinyl incarnation of this set) functions more as an appetizer for the aforementioned What's For Dinner?, sporting six but short sweet bangers, with the relatively disciplined "Cylenol" rocking my boat the most.

The entire three disk package (vinyl or CD) is available now through Bandcamp, but supplies of each are limited to 500 apiece.  A reasonably priced digital download is also at your disposal.