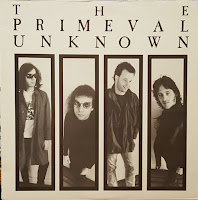 If "garage rock" seems unrepresented on these pages, I suppose that's not a particularly startling revelation given that isn't one of the coveted genres mentioned in the Wilfully Obscure header. Just in case you're wondering I do enjoy a good blast of that stuff now and again, be it from originators like Question Mark and Mysterians and the Count Five, and several that came a little later in the twentieth century including Lyres and Swingin' Neckbreakers.  Though they didn't boast an overarching shtick or gimmick, New York's Primeval Unknown were still a classic, no BS epitome of what this sect of music had to offer, delivering quality songs sans any (or much, anyway) attention-grabbing histrionics.  In short, the Primevals drew from respectable resources, the likes of which you've certainly encountered before - The Stooges, early Screaming Trees, The Seeds, while inserting some well proportioned Stones-y and Doors-y affectations.  Throughout this dozen song platter, P/U succinctly balance grit, sass, psych and just enough moderation to keep things from careening off the rails altogether.  And if you're anything like myself, you'll find virtually nothing in the way of the campy muck that made The Cramps and Birthday Party such a miserable listening experience for yours truly.  It felt like I'd been hearing this band's name for decades (and I likely had), but when I finally went to research them I couldn't find something as simple as a bio or a basic backgrounder.  Just enjoy the record for what it is I suppose, 'cos it's a hot one.

Thanks! Guess what? it’s almost hannukah time! A special time at the ol’ WO!

Thanks! Please more Garage in the future.

Dynamics 365 Business Central on premise pricing fits the needs of Small and Midsize Businesses with core business needs. It helps organizations connect their financials, sales, service, and operations. For organizations of any size that have more sophisticated needs, business central offers a variety of applications including Marketing, Sales, Service, Finance, Operations, and Talent. As we know Dynamics 365 Business Central is sold and implemented through a global network of Dynamics 365 partners with industry expertise. Therefore, connect with a partner to request a demo and further evaluate the solution capabilities and business central on premise pricing .