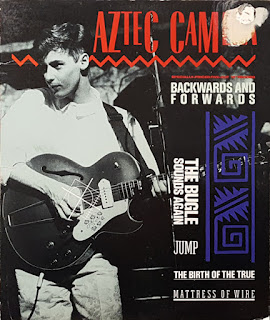 I guess sharing this one is a no-brainer, seeing how popular my previous Aztec Camera entries went with you.  Before going much further sorry for the unsightly splotch in the upper right corner of the sleeve, that's the state it was in when I purchased it for a mere $2.  This is actually a 10" record housed in folder, roughly the same dimensions of the kind you probably stuck in your backpack when you were in grade school (with "pockets" on the inside no less).  The sole studio offering here is a cover of Van Halen's "Jump," a version I really resisted hearing when it came out, because the combination seemed too ironic to feasibly work. In the rear-view, Roddy Frame's reading of that smash hit was downright smart and tasteful, recalibrating the meter, melody and tenor where appropriate to make it fit in an acoustic context.

The remaining four cuts are sublime performances culled from a 1984 concert at London's Dominion Theatre, which followed up Aztec's most recent LP, Knife. Fittingly enough we're treated to two songs from that record, and equally from it's even more renown predecessor, High Land, Hard Rain.  For the purists out there who never got over the impeccability of High Land (classic and crucial as it was), and opted not to venture further into A/C's catalog, "Backwords and Forwards" and "The Birth of the True" make a really convincing case for investigating what followed.  By the way, this EP was appended to no less than two different CD reissues of Knife, both of which I regrettably slept on.