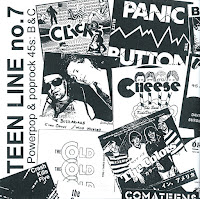 I love sharing Teen Line compilations, because they're a very easy sell, even when they're not bustling with recognizable names.  I've shared volumes 1-6 in preceding years, and sadly after this installment there's very little left in this series.  For the uninitiated, Teen Line was a formally in-progress and now sadly incomplete and abandoned project that was in the hands of the Hyped to Death curators who were also responsible for the Messthetics and Homework series, loosely modeled after the legendary and revered Killed By Death DIY comp juggernaut.  Culled from numerous self-released and small indie label 45s (with a selection from the occasional LP) the Teen Line series informally cataloged and canonized some of the finest American power-pop/punk songs the late '70s/'80s had to offer - that in all likelihood you wouldn't have known about otherwise.  Yes, they burrow very, very deep, sharing scarce, privately pressed gems that will often run you $50-$100+ on Ebay or Discogs - that is if you're lucky enough to find them listed there to begin with. 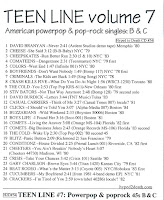 Volume #7 doesn't disappoint in the slightest.  Crash Kills Five, a Ramones-worshiping aggregation from Toronto are one of my immediate go-tos on this one.  New York is represented by the scintillating Colors, and farfisa-driven garage purveyors the Cheepskates who are of Lyres-grade aesthetics.  Ex-Dead Boy Stiv Bators lives on with the comparatively pop-sided "Not That Way Anymore," and while hardly a household name, power-pop pioneer Gary Charleston is present too.  And if it's more jangly environs you're seeking, lay an ear or two on David Burdick, The Clicks, and Cheese.  Florida's Comets appear with two selections, including the Jam-inflected pearl, "Big Business Jokes."  You might recognize Beat Rodeo and the Cucumbers from entries on this very website, and The Cold are reminiscent of one my all-time faves, the Pointed Sticks.  I feel as if I've barely scraped the surface folks, but enough of my jibber-jabber - download this pronto!  The full tracklist is directly to your right, just click to enlarge.  Finally, links to Teen Line vols. 1-6 appear to be functioning...for now.

Thank you for the Teen Line series, great music!

Hi,
I've been following you for a long time and finally I've decided to show my face.
Congratulations for the blog and thanks for all the great music you share.
Best Regards!!!

Thanks for the kind words. I think the Teen Line series has an early 2000s reign.

Do you have any idea if the messthetics comps are available for download anywhere? A quick internet search hasn't turned up anything for me.

Enjoy! Die Or DIY is a great blog, and Jonny Z has a swell podcast on Mixcloud.

These Teen Line comps are some of my favorites. There's something about the energy on these tracks that is infectious (more so than a lot of other compilation series can state.)

Wonderful stuff! Thanks for keeping these comps alive.

re-up? I'm new here, but I like what I see! Gonna be a regular