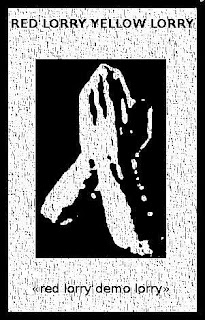 Just when I thought I had everything by my favorite post-punk gloomersters, Red Lorry Yellow Lorry, this surfaces, thanks to the magic of the internet.  I've had access to the Leeds quartet's five albums and a bazillion singles for roughly three decades now, not to mention dozens of live bootlegs, but virtually nothing in the way of studio rarities.  I found this unauthorized collection of early(ish) demos and alternate takes on my file sharing platform of choice last year, but it was derived from an apparently defunct music blog that his since been wiped from the internet.  Truth be told, you need to be an aficionado of the Lorries to really get the gist of this, considering a good half of it is composed of instrumentals.  Even for die-hards it's not quite an epiphany, but unless Chris Reed & Co decide to officially relinquish their archives it's as close to a grail as we're likely to get.

Things commence with "Monkeys on Juice," the source of which is uncredited, so most likely an early/working version.  A bit of a deviation on the chorus melody makes this one interesting.  The tape leads into a mid-tempo instrumental, with one of Wolfie's quintessentially serrated guitar lines.  We're then treated to a handful of BBC sessions, that have been widely circulated heretofore, but slot in nicely given the era that's presented. A cavalcade of delightfully raw four-track demos arrives next, previewing their first album Talk About the Weather and it's surrounding singles.  The arrangements of some are revealingly spartan, with vocals absent on several tunes...and the employment of a drum machine.  We're treated to two consecutive versions (on the same track no less) of my favorite Lorries anthem, "Generation," and another untitled instro piece.  The tail of the tape offers two spins of their '85 single, "Chance."  A couple of anomalies to bear in mind.  Some of the demos end abruptly, but this may have been intentional.  Also you'll notice the track list is missing a 3rd selection, and unfortunately I'm not at all privy to what it was.  Lorries fans have to take what we can get, and I'm hardly complaining, because this was quite the find.

can i get a copy of this, pretty please?