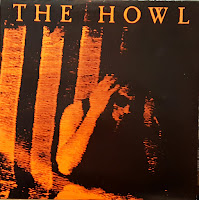 I'll cut to the chase.  This is a damn uneven record...but I don't think it was intended as such.  Maybe it's because these Rochester, NY suburbanites never really stayed on the same page from one song to the next.  The Howl's overarching shtick can accurately be deemed noir alt-rock, but there's too much fluidity amidst A Handshake and a Kiss that even a broad parameter such as that doesn't always conveniently apply.  Credited as a duo on the album jacket (though sounding suspiciously more like a quartet) you might say the Howl were about as "goth" as Gene Loves Jezebel.  In fact, you'll pick up on some vague Gene-esque angularities on "Disconnect" and "Give Your Heart to Me."  The real keeper on Handshake is undoubtedly "Red on Red," an appealing, mid tempo post-punk salvo with a discernible hook and guitar-work recalling vintage Comsat Angels.  And whaddaya know, the Howl are even generous enough to give us six minutes of this primo piece.  I can't always speak highly of the remainder of the record, which houses some real oddities like "Abduction," that commences with boilerplate blues guitar licks before abruptly segueing into an unlikely hardcore punk throwdown.  Anyway, eight cuts total and you might say each one has it's own flavor.  Find out which one(s) are right for you.

Im the guy who posted them on youtube Milo Zabal. I was luckily contacted by Tony Formicola a.k.a Jason Lunaire after he saw the album on youtube. He played the guitar on this record. Also he is into guns and has a safety/tactics yt channel. This is one hell of an album. Never heard something like this before. Thanks for the review, this music deserves more attention.