Welcome to Record Store Day!  True, this ain't no record store but for some of you music blogs are the next best thing.  Thankfully brick and mortar music dispensaries still exist, and on the second or third Saturday of every April the powers that be concocted a way to usher the proles into shops with a really cool (albeit expensive) incentive - hundreds of seriously limited vinyl releases all hitting the racks in one fell swoop.  I think I'd be jumping the gun to throw one of today's new Record Store Day releases out there for public consumption, so how about two items from RSD's past? 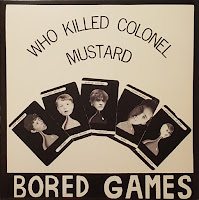 If you've been a longtime follower of this page, you know that I've all but come out and said the Straitjacket Fits are my favorite New Zealand export.  Through the late '80s right up until a good portion of the Clinton-era the band only gave us three albums of distortion-addled indie rock before they got tired of that whole bit.  Anyway, I'm the type that likes to excavate precursor, or "prequel" bands as it were, and as luck would have it there was indeed life before the Fits by way of frontman Shayne Carter's earlier punk outfit, Bored Games.  Only problem was, their only release was a 1982 EP that only saw the light of day down under on Flying Nun Records, and only a few die-hard Kiwi obsessives in North America imported a copy.  In fact, I assumed the record to be so scarce I quit looking for it before I even started.  To my utter good fortune and amazement, in 2014 Captured Tracks Records decided to repress that record, Who Killed Colonel Mustard, for that year's hallowed RSD, and I was more than delighted to snatch one up. Per the album sleeve, BG were a quintet, yet no one in the lineup other than Carter carried over to the Fits, or even his in-between combo, The Doublehappys.  Colonel Mustard was the product of high school-aged kids wise beyond their years (at least a couple years anyway).  It's four meagerly recorded, mid-tempo cuts are in the mold of early-Buzzcocks (and I mean the Howard Devoto years folks) which entails a certain amount of sass and dare I say even a modicum of melody.  "Joe 90" is the number that carries this disk over the finish line, a driving, deftly crafted ditty that's appealing as anything the Saints or Scientists ever devised.  Colonel Mustard may not be the most crucial artifact of it's era, but unarguably a keeper.  I've got it for you below in both MP3 and lossless FLAC. 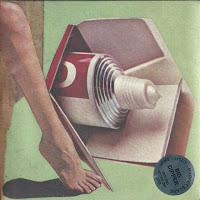 Onto to something a bit less archival.  If the name Big Dipper rings a big bell you probably go back aways, say 25-30 years ago.  This Beantown college rock staple was incorporated in the mid-80s out of the ashes of Volcano Suns.  The Suns Steve Michener and Gary Waleik hooked up with ex-Embarrassment axe slinger Bill Goffrier and drummer Jeff Oliphant who came courtesy of some less renown projects.  Big Dipper managed to differentiate themselves from those aforementioned antecedent bands, and created a unique noise-pop excursion of their own on an ep and a pair of lauded albums for Homestead Records (check out Heavens and Craps).  They made the jump to Epic Records in 1990 and issued one record, Slam, that found the quartet streamlining their approach before abandoning things altogether.  They reunited in 2012, minus Michener, and delivered a new LP, Big Dipper Crashes on the Platinum Planet, that helped reestablish their indie cred.  When I picked this 45 up in 2013 I assumed it consisted of exclusive material (or at least a non-LP b-side).  Ultimately both songs were swiped from ...Platinum Planet, but the rather oblique sleeve was designed by Guided by Voices' Robert Pollard, making it worth the price of admission alone.  If you're new to B/D, or at any rate their last album, consider this 45 as a taster of sorts.  The tense "Joke Outfit" makes for a frenetic and dissonant three minutes, while the more subdued "Market Scare" traipses along on it's own wavelength.

Wow! Is is Hannukah already? I guess this is Passover's afikomen prize. Thanks! As far as today's RSD goes, I'd be interested in the Minus 5's "Stroke Manor." (hint, hint)

I was actually thinking about saving the Bored Games for Chanukah, but figured why wait?

Cool one, thanks for sharing with us all, Spavid!
I have Big Dipper-SLAM (in FLAC) if anyone's interested.
https://www14.zippyshare.com/v/UlMLWlZ5/file.html

Thank you for sharing this. Always love the NZ bands.

Shayne Carter's memoir Dead People I Have Known is coming out 5/9.