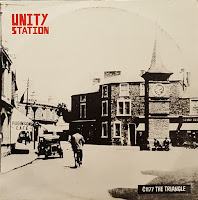 Another band time damn near forgot about, and even though they didn't land on my radar until a good 32 years after the fact, I'll take it.  Unity Station were stationed in Clevedon, England and only had a pair of eps to their credit.  Luckily the one I'm most familiar with is a knockout, or at minimum borders on one.  Tinctures of such period luminaries as the Cure, Echo and the Bunnymen and The Chameleons abound.  Prime mover Mike Eagle has a bit of an animated vocal panache, but his fingers steal the show as he effortlessly peels off spools of ringing chords matching or exceeding the acumen of any of his more renown contemporaries.  On C1177 The Triangle (no, I haven't a clue as to what the seemingly random letter/numbers in the title represent) we're treated to four sonically luscious songs that are as forward thinking as they are catchy.  More post-punk than pop, U/S deserved far more than footnote status.

The band's brief catalog was reissued digitally a few years ago, so if you enjoy, please consider patronizing them (while getting five additional tracks in the process) via iTunes or Amazon.  The tracks below were ripped from my original vinyl.