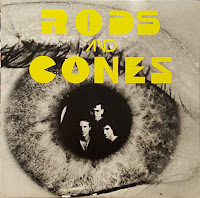 Not to be confused withe the Boston band of the same (coincidentally featured here a few years ago) the Rods and Cones I'm sharing today were a more economical three-piece set up, situated in the less urban locale of Bloomington, IN.  Guitar pop with varying dosages of power was their calling card and they played it capably, if perhaps half a step or two shy of the mainstream.  Their approach was plenty accessible, but thankfully not as gaudily decked out as the drivel that say, Huey Lewis and his dudes were crapping out around the same time.  The Rods thing was more in league with Tommy Tutone and later Knack.  "Hypnotize Women" and "Useless Knowledge" were cheeky riff-rockers with ample bite, bearing enough commercial prowess to land on AOR playlists of the day...though I'm not sure if that scenario ever came to fruition.  Rods and Cones winds things down with a novel acoustic reading of the Peanuts theme (lazily titled "Charlie Brown") before seguing into one last original.  BTW, the band reunites every Christmas for a local performance.  Visit the link above to be delivered to their Facebook page for evidence of this.

Thanks for sharing this! Guitarist PK Lavengood has been playing with John Eddie for many years.