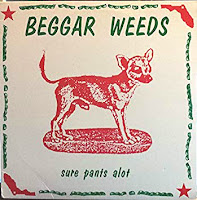 This long bygone Jacksonville, FL trio had an interesting array of parties cropping up in their "thank you" list - grandmas, the Chickasaw Mudpuppies, Henry Kissinger...  What to make of that is anyone's guess, and to a lesser extent you can apply that notion to the Beggar Weeds themselves.  From what little poking around I was able to do before stringing these 150 (or so) words together, I ascertained the band fancied themselves as "speed folk."  After a couple spins of Sure Pants Alot, the most immediate comparison I conjured up was that of a higher pitched John Fogerty fronting the Violent Femmes.  But as is the case with so many of my comparative attempts that's hardly a spot-on correlation.  There's a certain twangy modus operandi in operation here, and although BW were a discernible product of the deep south their vibe was thankfully more nonchalant than forced.  Word has it the band made inroads with the Athens, GA indie circuit of the day, so it's not a stretch to say the 40 Watt Club contingent rubbed off on 'em, at least to a modest extent.  In a nutshell, this platter is exponentially more earnest than hip - and thirty some years after the fact I'd say these boys settled upon the correct equation.

Easily one of the top 10 swamp cities in northeastern Florida.