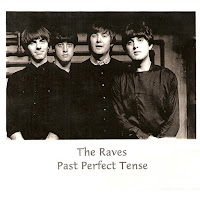 Here's a band that time forgot...but Not Lame didn't.  No, this wasn't a Not Lame Records release, rather a title I procured from their distribution arm of other labels they were thankfully carrying.  This Atlanta era quartet had roots all the way back to an early-70s group, Nod, before rechristening themselves as The Raves in the subsequent decade.  Unabashed power pop was their calling card, rooted in the likes of the Raspberries, but in practice more tangibly resembling Shoes, The Rubinoos, and a variety of their equally obscuro contemporaries on the Titan Records imprint (e.g. the Secrets and Arlis).  A handful of the songs here are culled from The Color of Tears LP, but the bulk of them are unreleased.  I don't have liner notes to refer to, as my copy only came with a b&w tracklist with no credits or background details to speak of.  The Raves were immensely competent and gratifying, and in fact their only shortcoming (if it can even be referred to as such) was their likeness to a myriad of similar combos during their tenure.  A second comp of Raves (and Nods) material supposedly saw the light of day in 2002 but seems to have vanished upon release.

Great stuff! i got mine from NL as well, a mightily missed outlet.....thanks!

This is Chuck Yoakum of The Raves. If anyone is interested in more info, music or videos. Check out The Raves Facebook page at https://m.facebook.com/The-Raves-171935879599777/ . You can send me a message via Messenger in Facebook or email theraves@juno.com. Thank you for your interest and comments.

Hi! Could you please re-up this? Thank you