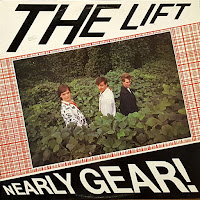 Hailing from the not oft spoken locale of Newport News, VA, The Lift weave some intermittent magic across the dozen song (and one stray chord) Nearly Gear!  The album jacket suggests this trio might be of rockabilly stock, but to far greater delight they apply a bevy of advanced maneuvers within our sometimes routine left-of-the-dial environs.  I say intermittent in the respect that the Lift have a tendency to diverge from song to song, resembling a cornucopia of their contemporaries.  The band light the pleasure sensors ablaze on "Plush With Blonde" and "Monetary Means," emanating the stripe of creative juices Matthew Sweet did with his early Buzz of Delight endeavor, and ditto for such oddly alluring combos from Wilfully Obscure's back pages like Cannon Heath Down and Square Root of Now.  Something Fierce comes to mind as well.  When the Lift shift into peak performance, Nearly Gear! resembles some sort of long lost Mitch Easter production credit.  Elsewhere, we're allotted a par excellence serving of power pop in the guise of  "Good Head," and "This Is Bad's" Johnny Marr inflected jangle is nearly as sublime.  Despite some demonstrable inconsistencies this record still manages to border on a revelation.

BTW, Lift fulcrum Bryan Forrest has a Reverbnation page featuring music from a variety of his endeavors, including the one I just introduced you to.  Well worth exploring.

not bad at all!! could've used a little more firepower, but still good!! i hear A LOT of Aztec Camera lightness, with lots of jazzy guitar chords, etc!!!! thanks much!!!

This is Bryan Forrest and I would like to thank you for this great review. Our bassist, David Orr, passed away unexpectedly in the very month that you created this posting and a lot of his work after our band ended was with the group Tusko Fatale who also have a ReverbNation page...worth a listen!

Hey Bryan. Just seeing this now. Very sorry to hear about David. That's an unhappy coincidence for sure. Wow. Feel free to email at the addy in my profile . I wouldn't mind asking you more about your old band. Thanks.

Hello, could you please re-up this please?