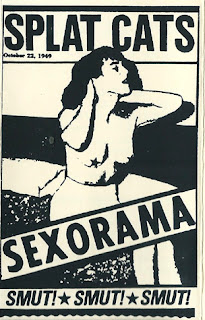 The Splatcats rarely come up in conversation these days, if ever - even in their misbegotten home turf of Buffalo, NY.  But in their brief reign during the mid' 80s right up to the dawn of the Clinton era, these gents proved to be one of the most reliable and competent combos on the circuit, even generating ripples all the way over in Europe.  Sporting a penchant for ballsy rock with a delightfully punky verve, and even some garagey undercurrents, the band released a trio of remarkably consistent albums between 1986-90, with their debut Sin 73 garnering then the most notoriety.  Their earliest material loosely hovered in the vicinity of contemporaries the Lime Spiders, and by the time their 1990 swan song, Right On! was rolled out (albeit exclusively overseas to the frustration of local fans), the boys took a more linear tact.  This cassette only compendium (not an official release) focuses on the 'Cats latter era, offering a side of then brand new material, while the flip functioned as a six-song sampler for Right On!

No copyright date is provided, but I would peg this tape right around 1991.  Some of the band's final cuts truly were their finest, with the smart "Smile Jenny, You're Dead" and "Susan, God & I," exuding a bright, tuneful penchant vaguely channeling the Replacements, and more accurately that band's unheralded acolytes the Magnolias and Junk Monkeys.  To my knowledge the first seven songs here are resident to this release only.  Perhaps another Splatcats morsel or two will drop on this site in the future.

Thank You Very Much For The Splatcats.I lived in the Buffalo area aound that time.Was wondering if you had any Mark Freeland's Electroman. Once again I'm very appreciative of your blog. Thanks VT