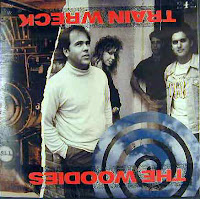 Here's another dose of "lost" '80s pop, this time hailing from Tampa, FL.  Train Wreck was the co-ed Woodies second record and if anything else, it's pretty much impossible not to tout the album's duo of driving, propulsive rockers that bookend this six song affair, "Part of My Act" and "Penelope Says."  Two primo numbers that would've sounded perfectly at home on any left-of-the-dial outlet of the era, not to mention the kind of splendid tuneage Wilfully Obscure has staked it's reputation on.  The four remaining songs plucked from the Woodie's Wreckage vary, with pleasing flourishes like some well-placed mandolin in "My Muslim Wife," while the bouncy, simpleton tact of "Pretty Brown Eyes" flirts with, you guessed it, power pop.

Very, very nice. Would love to hear more from this band. Thanks for all you do!

Oh man, this is great stuff. There are hints of Let's Active! in some of the songs. It's right up my alley. Thanks again for unearthing these gems from my favorite musical era!

I hear those Let's Active elements too Pernt. Always a wonderful thing.

80s power pop. Co-ed. From the south. That hits some key positive indicators for me. Plus of course your positive write up. Very much looking forward to hearing this.