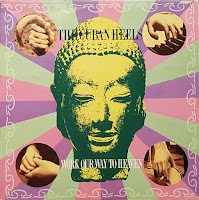 For a band whose lone marketplace offering was just one measly punk 45 in 1977, Scotland's Johnny and the Self Abusers nevertheless contained members that would spin off into the eventual world renown Simple Minds (Jim Kerr to be specific)...and this band.  The Cuban Heels, which entailed the involvement of ex-Abusers Michael McNeil, John Milarky and Tony Donald, had something a bit less lofty and pious in mind than Kerr and his long running offshoots, and all the better for it as evidenced by Work Our Way to Heaven.

The near-spotless first half of the album in question often rocks out like a sturdier XTC - tuneful, smart and dare I say a good couple of years before it's time.  "Liberty Park" and "A Matter of Time" are but a couple of inspired standouts. Side two finds the Heels milling about in a couple of different orbits.  The hepped up dance rock of "Walk on Water" and "Hard Times" sound downright frivolous by comparison, and "Coming Up for Air" is a strikingly subdued chamber music piece.  The title track is loosely similar to some of Public Image Ltd's more structured 'pop' dabblings, and the finale "My Colours Fly" is assertive and lively as anything found on Heaven's better half.  It would prove to the Heels sole full length, but roughly half a dozen singles surrounded it.  All of these songs collected in one tidy spot would make for a splendid reissue (hint, hint).