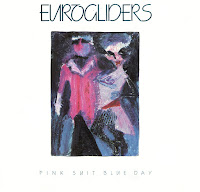 So...these folks down under never had much of a Stateside following.  My intro to the Eurogliders?  None other than a cameo appearance in an Aussie b-movie called Fast Talking.  Sort of an Oz variation on the classic Matt Dillon flick, Over the Edge, albeit with a significantly lower budget.  As Fast Talking grew on me, so did the tune the Eurogliders were performing, specifically "Another Big Day in the Big World."  However when I got around to hearing the album version of that song (on the band's 1984 This Island LP) I was dismayed by it's far glossier and brighter arrangement.  Still, I was game to investigate any of the band's earlier offerings, which perhaps promised to be a bit less slick.

I was in luck upon learning of the existence of a previous album, Pink Suit Blue Day, which I'm offering up for public consumption.  Helmed by Grace Knight, the 'gliders vibe was on the new wave tip for certain, but as far as this platter goes decidedly non-formulaic at that.  Occasionally lacking in focus, and sometimes regrettably in song quality, Pink Suit... would have been better pared down to a more consistent ep -  yet it's the most intriguing feather in the band's collective cap by a long shot.  Amidst some of the misfires (the bulk of which are at least listenable) there are a gaggle of promising melodic pieces in the guise of "Touching Me," "No Laughing Matter" and "Magneto."  I'd be remiss if I failed to mention the opening track, "Jeepney Talk" is a primo merger of guitars and snyths, though I could do without some of the robotic affectations on Knight's vocals.  The band achieved a significantly more lucrative payout with the aforementioned This Island and '85s Absolutely!

Incidentally, I previously featured a record by a combo dubbed The Stockings, who contained future Eurogliders guitarist Bernie Lynch.

I saw The Eurogliders 100 times in 1982 /83 in Sydney.
I sang on stage with them at Hotel Manly.
I carried Amanda Vincent's keyboards up the stairs at The Govenor's Pleasure in The Rocks.
This is one of the most emotional albums in my vast collection, it means so much to me.
I love this band with all my heart.
Great days and great memories.

I have to disagree with most of David's comments!
He doesn't understand the minimal budget they had at the time.
That's why they recorded in Manilla, Philippines.
It's one of the best debut albums of all time.