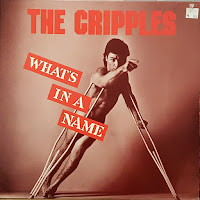 Maybe you can't judge a book by it's cover...but records are an entirely different matter.  I'm not sure if the fellow on the album sleeve is Cripples mouthpiece Shawn O'Brien, but whomever is striking that rather pointed pose would probably suggest to the potential listener they might be in for a cheeky listen, to say the least. O'Brien, as they say, is a character, more specifically one that possesses a timbre that sounds like a sardonic amalgam of Buster Poindexter and Huey Lewis.  His bandmates however aren't quite on the same page, conjuring up the feel of the Plimsouls and to a lesser degree the Flamin' Groovies on the winsome and melodic title piece.  Elsewhere, these players are patently '80s.  Without a doubt, O'Brien is the heart, soul and crutches of the Cripples, so if you ain't down with his none-too-serious m.o. What's in a Name might grate on your nerves a tad.  I'd still give this a whirl, if only because I appreciate where these chaps are coming from musically.

By the way, the Cripples made an appearance on the soundtrack to the 1980 flick, Cruising.

Thank you Spavid for this EP!!
Do you maybe also have their LP?:)
I thank you once again:)

Nah, I haven't come across the LP as of yet. Maybe someday.

Whew... This was a tough listen. The music was perfectly fine, poppy angular new wave-y stuff. But those vocals... I tried, believe me, I tried to get into the vibe they were trying to create, but the singer's voice never let me settle into the music. Thanks for posting, though. I never would have heard of it otherwise.