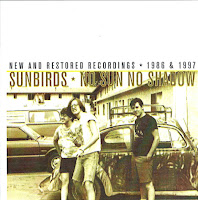 Chico, CA has never been much of a musical epicenter, but for the lucky few that made their acquaintance with a local mid-80s trio dubbed Sunbirds, that northern Cali locale must have been all the more sacred.  During their initial run, circa '86, (The) Sunbirds had made little in the way of music for public consumption and wouldn't reconvene until eleven years later.  Six songs apiece from each of these eras were compiled onto the archival, No Sun No Shadow in 2003.  With connections to other area left-of-the-dial outfits like Barbara Manning's 28th Day, The Downsiders, and even local yokels Vomit Launch, the Sunbirds naturally exuded an indie rock disposition.  On the nascent recordings that comprise the second half of No Sun... the band's penchant for clangy, jangle-laced guitar maneuvers and achingly endowed vocals, courtesy of one Cole Marquis, could have easily begged comparisons to early REM.  I can also draw parallels to Sunbirds contemporaries the Pedaljets and Libertines (Ohio) in large part to the lo-fidelity, rough hewn angularities of "Three Easy Steps" and "Old Black Crow," the latter bearing an opening salvo that mimics Bauhaus' "Bela Legosi's Dead," before settling into something more indigenous.

The 1997 reunion songs (represented on the first half of the CD) speak volumes about Sunbird's development as players.  Despite a samey-ness factor, the material throughout No Sun... is succulent ear candy to a fault.  Yes, much of what's here could have benefited from better recording facilities, but all of that tape hiss and analog ambiance are part of this compilation's charm.

pretty good, thanks! i liked the 2 voices of Barbara Manning and Cole Marquis in 28th Day very much.....

Any mention of The Libertines (Ohio) is enough to get me checking it out.