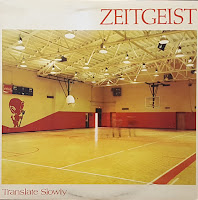 A couple of you have pointed out the CD version of  Zeitgeist's (later The Reivers) Translate Slowly, which I initially shared back in 2007 is a different mix than the vinyl version.  So, voila, I'm presenting you with the vinyl mix, taken from my own copy. Yes, sonically there are differences between the two of them, with the original analog version striking me as a tad bit murkier and grittier.  The CD mix, as as you might expect, is the brighter of the two, yielding a more lucid semblance to just about every given facet of the record.  The link to that version is here, where it's always been.

For the uninitiated, Zeitgeist/Reivers crafted an impeccable album of jangly and clangy left-of-the-dial rock (this one).  After the name alternation they made two more equally substantive albums (Saturday and The End of the Day) for Capitol Records in the later '80s, and then some independently, including a reunion record in 2013.  Check out my original entry for Translate Slowly here, and the band's impeccably detailed website.

PS: Track twelve has a skip that I couldn't do anything about.  My apologies.

Reivers/Zeitgeist my favorite "new" band of 2017. Thanks a lot!

thanks!! i remember buying it when it first came out, think i might've read about it in the old MATTER magazine, remember that one?

Thank you, thank you, a thousand times thank you!!!!!

Please can you reup?