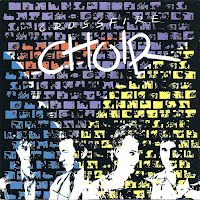 More rock o' the '80s, comin' atcha.  So...this one wasn't exactly what I was expecting.  I've been interfacing with Crossfire Choir's albums for awhile - more like a decade or so to be exact.  I initially took the plunge with their third record, Dominique a couple years ago (which I'll get to in a future post) but I thought I'd start chronologically with these Florida to NYC transplants. A good half of the quartet's self-titled debut is actually pretty respectable, albeit nondescript at points.  Residing in the middle of the FM bandwidth, the band offer meager concessions to us left field types, sporting an array of mainstream-ish likenesses such as late '80s Duran, the Alarm, and Glass Tiger (yeah, I know, but occasionally accurate).

Oddly enough, C/C would wind up accumulating artistic cred as their tenure progressed, which was usually the polar opposite with any of their contemporaries, famous or otherwise.  So far as this platter is concerned, revelations are in short supply yet it's more than listenable, perhaps with one glaring exception.  One of Crossfire Choir's key selling points for yours truly was the inclusion of a CD bonus track (remember those?), "Frantic Romantic."  Any indie music-head worth their salt would make the safe assumption this was a cover of the Scientists post-punk classic, but startlingly it's an original - one that veers heavily in the vicinity of Oingo Boingo to boot.  Bummer.  Here's a link to an archived article on the Choir pertaining to the era surrounding the record in question.

Thanks soooo much for this!!! Somewhere I have moldy cassettes of all three Crossfire Choir albums... I was in college in NJ when CC was packing local clubs, and snapped up the albums as they were released (didn't have a CD player yet). I liked their stuff, though I agree with your review 100%. I also thought they had a bit of Big Country's sound. If you can post Back to the Wall and Dominique, I can enjoy their entire ouevre again without having to unearth those moldy cassettes...
And yea, verily, Willfully Obscure ROCKS

Thanks for the kind words Mark. I will post the rest in due time. I think they put out a single before this email, which I understand is something of a collectable.

is posible in your blog BACK TO THE WALL .. thank you!! gettings from spain

Thank you spavid soo much for sharing this obscure album!
Please, upload their 2nd album as well when you can:-)

Dang, thoroughly enjoying this, new-to-these-ears, band. Thanks for another new discovery Wilfully Obscure!

Can anybody share with me this music please? the link do not work