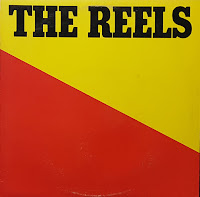 Denizens from down under, The Reel's peppy, organ-induced wave/pop was seemingly derived from the blueprint of such Elvis Costello slammers as "Radio, Radio" and "Moods for Moderns." To the band's credit, E.C. wasn't their only muse, boasting heightened rhythmic sensibilities that were more advanced than straight pub rock or power pop.  Robust but never overwhelming, The Reels manages to tread lightly into the same realm ska-lite demigods Madness were contemporaneously propagating.  The results are often infectious, with dizzying delights like "Prefab Heart," "Plastic Pop," and "Misused, Abused" all vying for the epitome of what this Aussie crew had to offer at the time.  The Reels didn't do squat in the States, and moreover they didn't hit pay dirt on their own home turf a couple years later with their breakthrough, Quasimodo's Dream.  If this record alone won't suffice, fear not, there's more Reels available on iTunes and such.

i'd never heard of these guys 'til their keyboard player Craig Hooper played/toured with The Church in late 1984 here in the US..thanks!!!