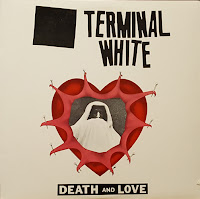 Sometimes I like to pitch ya'll a curve ball now and again.  The opening salvo, "Slaughter Me," on this Chicago unit's first ep oozes coldwave and synthy minimalism galore - not usually the stuff I specialize in.  In fact, Terminal White are wont to cling to their drum machine as fiercely as the marshall-istic beats that emanate from it.  Factor in ever-so-slightly pious, goth tinged vocals, and you might might be tempted to write T Whitey off altogether.  But if you're willing to invest a few more minutes in Death and Love, you'll be pleased to discover that things warm up quickly on "Waterboy" awash in sweet, clangy post-punk guitar lines.  "It's All Over in April" caps things off on a decidedly somber, albeit approachable note.

Terminal White are still in existence, and responsible for a recent mini-album, Blind Pig, available from the usual bevy of digital vendors. Also, for those of you who are noncommittal about downloading Death and Love, it can be streamed through the band's website, alongside a variety of their other endeavors.