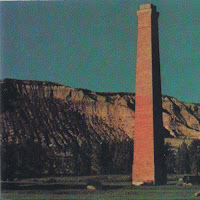 Thursday morning I learned that Grant Hart, drummer and co-vocalist of my all time favorite band, Husker Du, had passed away from cancer, a diagnosis I was ignorant to up until the announcement.  That plain-clothed power-trio from Minneapolis set me on the most exciting and visceral musical trajectory of my life.  They opened many a door for me.  I never witnessed Husker Du live, but had the opportunity to spend some time with Grant Hart, and am grateful for having the privilege of doing so.

The truth is, I had a closer affinity to Bob Mould's post-Husker endeavors than Grant's.  Still, every record he put his stamp on was at the very least worth investigating.  The self-titled second album from Grant's next band, Nova Mob, was well above average and worthy of the kind of copious praise heaped upon Sugar and Bob's early solo records.  It's also the most guitar-oriented album Grant was involved with outside of   Husker Du.  Some outright great songs present - "Old Empire," "Little Miss Information" and "Shoot Your Way to Freedom."  Many Hart related releases preceded and followed Nova Mob, but it's the closest he would come to perfection in his own right.  It's quite sobering to know that the voice behind these songs, and so many classics like "Green Eyes," "Sorry Somehow" and "Turn on the News" has been silenced.  Rest in peace, Admiral of the Sea

What a great tribute to Grant Hart. Husker Du was very important to me as well. I only saw them once, but I remember trying to figure out where the other 6 guitarists were hiding. The sound was massive. Bob and Grant had a great dichotomy on the Husker Du albums.
You have a wonderful blog - please keep up the good work.

Thanks for this remembrance.

Husker Du would not have been the band they were without Grant's songs. I listened to Metal Circus last night for the first time in a LONG time, and while Bob's songs had the speed and insane guitars, Grant's 2 contributions were slower (but with equal emotion) and more melodic in a way that complimented the EP. And one of those 2 songs, Diane, was a 4-minute horror movie mini-opera, more chilling than anything by contemporaries like Blag Flag. I could say the same about every Du LP that followed. It may be a stretch to compare Husker Du to the Beatles and Badfinger, but all these bands had 2 (or 3) equally talented songwriters and singers in that complemented one another and expanded the scope of the band, something rare in rocknroll.

Thanks for this-he will be missed.

Thanks. I couldn't agree more with all of you. "Diane" is a harrowing mofo of a song. Not easy listening. As for what you mentioned Jonathan, I wonder if Bob was using multi-tracks of guitars on some of the earlier titles like Zen Arcade?

Sorry you never got to see the Huskers live. I managed to catch every tour from New Day Rising on, and they were always great, although the Warehouse tour where they just played the album front to back was pretty filled with tension between Bob and Grant.

Greatest band ever. Even better than the Clash. Music won't be the same without him.