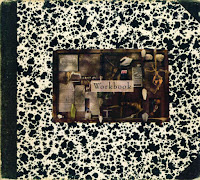 My apologies if it seems like I've been phoning it in lately.  Hopefully in the near future I'll be able to provide you with a "normal" amount of content again.  Until then I have this.  Workbook was Bob Mould's first album after dissolving Husker Du in the tail end of 1987 (or was it early 1988).  That band veritably changed my life and musical trajectory.  It surprised a lot of people when Bob returned to music with an unabashedly acoustic endeavor.  By coincidence, Workbook was very much in the same league as Richard Thompson, another acoustic-y singer/songwriter.  At any rate, here are eight drum machine-driven sketches for the album in question (some of which btw never gestated past the demo stage).  Dare I say an audio workbook for a Workbook?

Unrelated question....
But...
Any chance you can upload THE GLADSTONES JEREMY album? The link from 2010 has expired of course...cant find "Mary, I" track #6 anywhere :) thanks in advance!
-hLee

No worries. You have more than enough in the archives to keep us busy! Thanks for your good work.

I haven't heard these before - thank you for the post (and the blog in general).